Fred Couples daggers Greg Norman: "Nobody has liked him for 25 years" 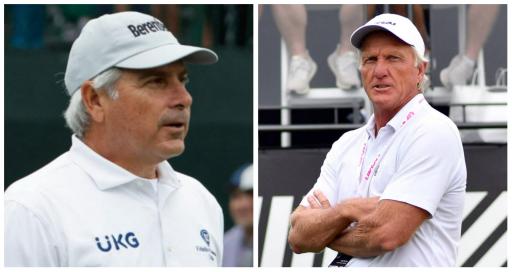 Fred Couples has previously made absolutely no secret in letting the world know how he feels about the LIV Golf players.

But his most recent comments to Golf's Alan Bastable really stick the knife into Greg Norman. I mean, full marks for honesty with these words.

Couples, now 62, appeared to be revelling in seeing the LIV guys get knocked down a peg or two in golf's civil war earlier in the week.

In case you weren't aware, three LIV Golf rebels were denied the chance to play in the PGA Tour's postseason by a federal judge on Tuesday.

How we would have loved to see the reactions from LIV players Talor Gooch, Hudson Swafford and Matt Jones.

Just take a look at the comments:

"All these guys think they're changing the game and to me it's comical, it's really comical," Couples told reporters at the Shaw Charity Classic.

"To have music on every tee and have people drinking beers and think that's cool ... I never thought the cast and crew that would do that would be the guys doing it.

"If they win or lose [in court], I don't really care. I'm 62, I play the Champions Tour, but it's a little heart-breaking.

"Go do what you're doing. Suing the Tour, 11 guys when there's probably 200 guys on the Tour, I just find it really, really weird.

"And I have a funny feeling I know where it's coming and it's coming from their leader [Greg Norman], who no one's liked for 25 years.

"And that's not being mean, that's just — that's the truth. He's not a friend of mine, but he never would be because we don't get along. But he's running a tour that he thinks is incredible."

Couples' line about nobody liking Norman for 25 years is clearly a jibe at when the Great White Shark previously tried to defy the PGA Tour.

Norman wanted to start a world golf league in the 1990s.  He banged the drum back then for bigger prize purses, appearance fees and of course the fact that they are independent contractors.

Whether or not you agree with what Norman is doing with the LIV Golf Invitational Series is up to you.

But it's clear, back then not everybody on the Tour agreed with him. And they certainly don't agree with him now.

Next page: Did Cameron Smith all-but confirm he is going to LIV?