Hudson Swafford came from three strokes behind at the start of the final round at La Quinta to claim an unlikely win in California. 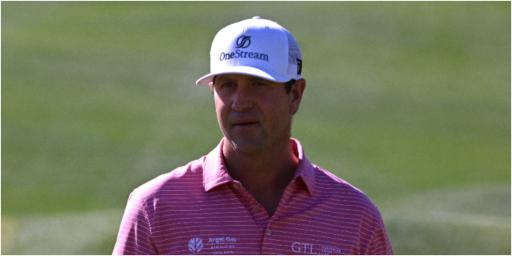 Hudson Swafford won The American Express on the PGA Tour for the second time with a blistering Sunday performance.

Although the field was not absolutely stacked, Jon Rahm and Patrick Cantlay were expected to mount the charge this week.

Rahm looked frustrated with his cold putter all week and bemoaned the low-scoring. Cantlay, while not poor, seemed flat.

Cantlay finished his week at 18-under par. Rahm, in the end, was four strokes behind the reigning FedEx Cup champion.

Swafford, 34, picked up his third win on the PGA Tour and his second title here, where it was previously called the CareerBuilder Challenge in 2017.

A general rule of thumb on the PGA Tour so far this season is that if you want to win, you have to go really low on the final day.

The average scoring on Sunday since the season began has roughly been about 65. Swafford's final round was a 64 at La Quinta.

By the time Swafford got to the 16th tee, he had amassed eight birdies, an eagle and three bogeys to force daylight between him and the field.

On the 17th hole, the devilish par-3 which has seen quintuple bogeys and other treachery, Swafford all but closed it with a huge birdie putt.

Watching on the tee behind, chasers Lee Hodges and Tom Hoge had to just sit back and accept their fate as Swafford celebrated.

All he had to do up 18 was keep it dry. He did the hard part and got it on the dancefloor. The only problem was his lag put went racing by.

He made the returning 10 foot putt for par and gave the crowd another fist-pump to get into the clubhouse at 23-under par.

It forced Tom Hoge to attempt to hole out from the fairway from 166 yards to force a play-off. He couldn't.

Lanto Griffin and the ever-consistent Brian Harman also finished inside the top-10.

Swafford's margin of victory was by two strokes. He also picked up $1.3million for his efforts.

What was more impressive was the fact he started three shots behind the lead and made bogey at the first.

From there, it really was a complete performance with supreme ball-striking and beautiful putting.

Elsewhere, Francesco Molinari returned to form this week, having spent the last 18 months or so in neutral.

Molinari finished inside the top five with a good performance. Hopefully for the Italian it's the spark to reignite his stalling career.

With the win, Swafford picked up 500 FedEx Cup points and is fully exempt through the 2023-24 PGA Tour season.

He also secured spots at The Players Championship, the Masters, PGA Championship and the 2023 Tournament of Champions.

Related: PGA Tour caddie stops player at the top of his backswing