WATCH: Bold PGA Tour caddie stops player AT THE TOP of his backswing

This PGA Tour caddie showed some serious metal in stopping his player at the top of his backswing during The American Express. 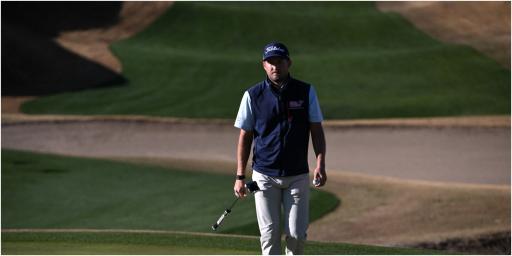 This PGA Tour caddie showed some serious cojones to stop his player at the top of his backswing.

A general rule of thumb if you're going to stop a player from swinging then you must make sure you have a pretty darn good reason.

And for Lee Hodges, his carrier Robert Peeler did. The wind got up on the eighth hole of the PGA West Stadium Course.

Hodges was playing in The American Express. In fact, he was tied for the lead at this point and by day's end still in the same position.

Perhaps if he can get the job done on Sunday then Peeler can be in line for a nice little bonus too.

Hodges is addressing the ball and winds it up, ready to unleash.

"Hold up, hold up!" Peeler shouts.

Even Trevor Immelman, the announcer, was surrpised. Not at the call but at how late it was.

Of course, Hodges regained his composure and duly fired his shot into the green using a different club.

How Peeler may have had some sweaty hands at this point.

His call was correct as his shot ended up over the hole. From there he managed to find a simple two-putt for birdie.

Well, that was a fine piece of caddying in the end.

He'll have earned his 10 per cent cut at the end of the week.

Related: Watch Tiger Woods stop during his back swing