Jon Rahm was filmed expressing his displeasure with the course set-up at The American Express on the PGA Tour. 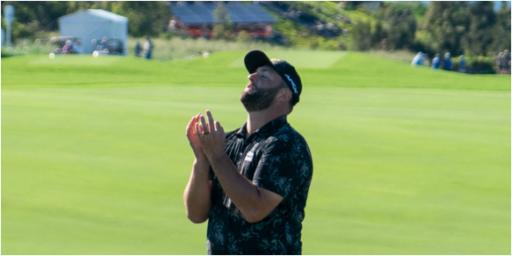 Jon Rahm was caught letting off some steam about the course set-up at The American Express on the PGA Tour.

The fiery Spaniard was filmed walking off a green on Sunday by a fan who captured his foul-mouthed moment in all its glory.

Rahm, who is currently the world number one after his sensational 2021, didn't appear to be too happy and let his feelings known.

It prompted a few comments on social media about how they would have loved to see him in the upcoming Netflix documentary.

"What a piece of s*** set-up f***ing putting contest week," Rahm can be heard saying as he marches off the green.

Presumably, Rahm was on the way to give his next tee shot the beans to let off some of his frustration.

A voice on the video can be heard asking, "Did you get that?". Er, yeah, they did. We heard all of that.

Rahm trailed the leaders by five strokes heading into the final day in the California swing event.

He started the tournament very well alongside Patrick Cantlay and opened up with a decent 66. A 70 followed.

Then it seemed like he couldn't catch a break on the greens yesterday when he signed for a 67.

Well, tell us how you really feel Jon.

Rahm wasn't the only person to let their temper get the better of them in a professional golf tournament this week.

England's Tyrrell Hatton let the F bombs fly when he failed to step off a shot despite the gusting winds at Yas Links.

Instead, he swung away at the Abu Dhabi HSBC Championship, and let his feelings known after.

Well, we could tell you what he said but it's not safe for public consumption.