"I would love to do it": Dustin Johnson on future Ryder Cup captaincy

Dustin Johnson has played in five Ryder Cups for the USA and collected five out of five points at Whistling Straits. 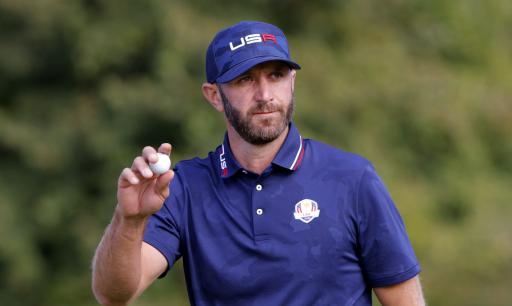 Dustin Johnson has expressed a strong interest in becoming the US Ryder Cup captain one day and he is confident that he would be a successful leader.

The former World No. 1 was the MVP for America at Whistling Straits. Steve Stricker chose him in all five matches and he delivered maximum points, becoming only the second American player to do so since 1979.

At 37 years old, Johnson was the oldest player on the US side but he showed the way for the young players. He formed a prosperous partnership with Open champion Collin Morikawa, who secured the decisive half point to take the trophy back across the pond.

His longevity and consistency in the game have been admirable and he will have a couple more playing appearances to fulfil, but Johnson has said a captaincy role would be fun too.

RELATED: "I'D BE ASTOUNDED IF TIGER WOODS MAKES THE MASTERS": OLYMPIC OSTEOPATH EXCLUSIVE

"Yeah, I would love to do it one day, I think it would be fun. I think I would be a good captain. Yeah, it's something that I definitely would like to do at some point.

"I feel like I would let the guys just do their thing. I think that's most important. The players are very good, I don't need to tell them how to play a golf course or tell them what to do, but just put them in a situation where they can succeed.

"I feel like I've got a good relationship with most of the players out here, and hopefully I'll be out here long enough to where I'll know the guys that are going to be on the team."

The two-time major champion is making his PGA Tour reappearance this week at the CJ Cup in Las Vegas, which sees many of the world's best players also return.

Johnson won the 2021 Saudi International and also made nine top-10's in his 21 starts on the PGA Tour last season. He was his usual steady self and he will be hoping to add to his 24 victories in 2022.