Ian Poulter has averaged 290 yards off the tee on the PGA Tour this season, so he was shocked to hit one almost 400 yards at TPC Craig Ranch on Saturday. 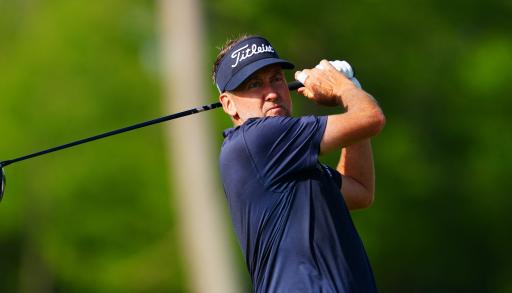 Three-time PGA Tour winner Ian Poulter is known for many things: his vein-popping celebrations, his clutch putting at the Ryder Cup and his social media antics.

The Englishman is not known for his big-hitting and explosive drives. He leaves that down to the likes of Bryson DeChambeau and Rory McIlroy.

But for just one drive during the third round of the AT&T Byron Nelson, Poulter felt like Bryson and Rory and hit a drive of 373 yards.

He teed it up on the par-5 12th hole but he blocked it right and shouted 'FORE'. By the looks of the footage, Poulter and his caddy couldn't tell what happened to his ball.

Using the cart path to his advantage

His ball bounded down the light rough on to a cart path and it didn't stop rolling. It eventually stopped 182 yards from the green and he had a good look at making the putting surface in two.

Before yesterday, the 46-year-old's longest drive this season had been 344 yards from the second round of the Shriners Children's Open back in October 2021.

Poulter took full advantage of his big break and found the green in two shots. He made a safe birdie and moved on to 8-under-par for the event.

He went on to card a 1-under-par 71 to sit in 61st place heading into the last 18 holes in McKinney. Poulter is currently 13 shots behind leader Sebastian Munoz who is looking for a wire-to-wire win.

Munoz shot a 66 in yesterday's third round to reach 21-under-par. He is one shot ahead of Jordan Spieth and two shots ahead of Joaquin Niemann.

Next Page: Ryan Fox leads by one from Sam Horsfield after Soudal Open third round