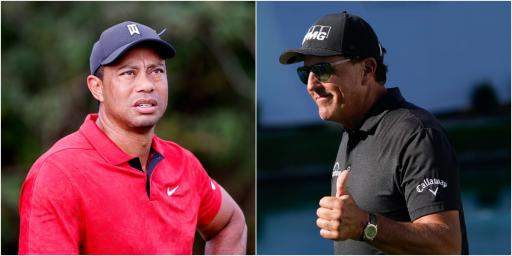 Lefty took to social media to boast of the news, which sees him take the top spot ahead of Tiger Woods.

If true, it is remarkable considering Woods, who will celebrate his birthday tomorrow, is the most Googled athlete in the United States in 2021.

The program has been seen as controversial as the PGA Tour looks to hand out cash to players who have the biggest social media presence.

More: The PGA Tour end of year reviews are in

They want their star players to reach the biggest audience which in turn will increase revenues.

Critics suggest it is just a case of the rich getting richer as the tour bosses seek to try and fend off rival golf leagues.

The program was seen by many as a direct response to the emerging threat of a breakaway golf league funded by Saudi Arabia.

The winner of the program this year took down $8 million, with second place getting $6 million.

At his most recent press conference, Woods signalled his intention to stay loyal to the PGA Tour as it is his legacy.

In a broadside at the PGA Tour, fans have stated that the money would be better served going to the other tours, such as the Korn Ferry Tour.

It would help the next generation of players coming through who will become the game's next biggest stars.

The 51-year-old this year became the oldest player ever to win a major when he won the PGA Championship at Kiawah Island.

He has been a prominent critic on a number of topics this year, including the lengths of drivers which have now been curtailed.

Golf Digest's Dan Rapaport has claimed that, 'well-placed sources' have suggested that Mickelson's claim is correct.

Next year, the player impact program prize pool has been increased by a further $10 million.

More: The subtle differences in Tiger and Charlie's Scotty Camerons