"It's only HARDENED my disapproval": Rory McIlroy says of Greg Norman's ventures

The Northern Irishman was critical of the dark forces in golf in 2014 and nothing has changed. 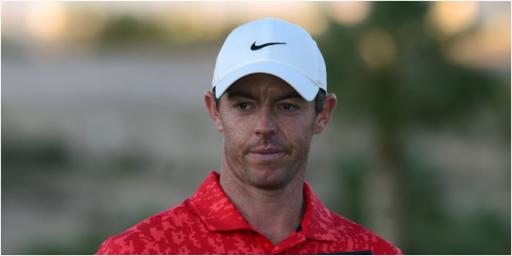 Ever since 2014 this story has been bubbling under the surface. The emergence of money from blood-stained sources looking to cash in on the game's biggest stars and form a breakaway league. McIlroy has been forthright in calling a spade a spade: it's a money grab, he has said.

And over the last few months the golf world has been gearing up to a big moment. The moment where it's effectively Norman and his cronies versus the rest of the world. Both the PGA Tour and the European Tour - soon to be the DP World Tour - have responded in kind.

Threats of banning players were issued by Jay Monahan, the PGA Tour's commissioner. While the European Tour formed a strategic alliance their American counterparts to try and fend off breakaway leagues and events with massive, massive prize funds.

MORE: RORY MCILROY ON "A YEAR OF EXPLORATION"

This is the last ever official European Tour event in Dubai this week, with the season-ending DP World Tour Championship. McIlroy, 32, has had an interesting season, to say the least. He's won a few times. Because he's McIlroy. But he had an emotionally draining Ryder Cup.

It led McIlroy to confess to the media this week the year of 2021 was a year of exploration after he previously told the world that "just being me is good enough" after a victory in Las Vegas at the CJ Cup. "I came through the other side of it," McIlroy said of the barrier of struggling with his game.

Obviously, a topic of conversation included the bombshell news of the European Tour's rebranding with millions upon millions on offer in prize money next year, plus co-sanctioned events with the PGA Tour. And he was asked by the media about Norman's business ventures, too.

"It's only hardened my view," McIlroy, 32, told the media in a press conference in Dubai. "There's been a select few individuals who have come on board with the other people and that also hardened my view even more."

Norman was recently named CEO of LIV Golf Investments. They have agreed a deal to launch a series of 10 events under the umbrella of the Asian Tour. LIV Golf Investments receives money from the public investment fund, the sovereign wealth of Saudi Arabia.

The Great White Shark has constantly refuted cries that he has a personal vendetta against the PGA Tour after his failed bid to form a world golf tour in the 1990s. He claims the idea for the series of new events is to grow the game in a positive way.

NEXT PAGE: BRYSON STRIPES ONE TO THE MOON AT TOP GOLF