Although Patrick Cantlay won the final two events of the season and the FedEx Cup, should Jon Rahm be the PGA Tour Player of the Year? 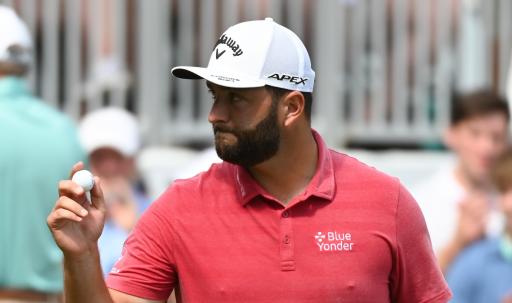 He won $15 million in the process and it topped off a fantastic season for the American in which he also won the ZOZO Championship and the Memorial Tournament.

Jon Rahm was just one shot short of Cantlay at the Tour Championship. Nonetheless, it was yet another top-five finish for Rahm and it has been an incredible season for the Spaniard.

Both players have enjoyed great success in 2021, but we want to give our reasons as to why we think Rahm deserves to win PGA Tour Player of the Year, as opposed to the obvious choice of the FedEx Cup champion Cantlay.

Consolidation as World No. 1

Rahm briefly became the World No. 1 after winning the Memorial Tournament in 2020, but he has now been the best golfer in the world for a sustained period of time.

He returned to the top of the pile after winning the US Open and finishing third at The Open Championship and since his finish at Sandwich, he is yet to be knocked off his perch.

In 2021, Rahm finished in the top 10 of each of the four majors. He finished tied fifth at Augusta National in April and tied eighth at the PGA Championship at Kiawah Island.

The Spaniard won his first major title at the US Open in June and he followed that up with a top-five finish at The Open. His massively impressive play in the biggest tournaments is a key sign of the player that he has become.

A Figure of Consistency

The 26-year-old has missed just one cut in his last 22 PGA Tour events. In this stretch, he has one win and 14 other finishes in the top-10, which is incredibly consistent play.

If we are to assume that he was going to romp to victory at the Memorial Tournament in June, this would have resulted in seven consecutive top-10 places on the PGA Tour.

These are statistics that no other player compares too and it is why he has maintained his position at the top of the world.

Rahm's play on the golf course has transposed into some incredible numbers and statistics. He leads the way in scoring average, birdie average, strokes gained in total and strokes gained from tee to green.

The Spaniard has vastly improved in 2021 and his scoring statistics explain why he has been seen at the top of so many leaderboards this season.

A European Beacon of Light

Rahm has been the stand out European player of the year this season and in a top 10 of players that is dominated by American superstars, he sits at the peak and he will be crucial for Padraig Harrington at the Ryder Cup.

Rory McIlroy and Viktor Hovland are ranked at 13th and 14th in the world rankings and Tyrrell Hatton is in 17th place, so it is a sizable gap of European representation between Rahm and Rory.

NEXT PAGE: DEBATE: HAS THE TIME COME FOR A MIXED VERSION OF THE RYDER CUP?