Bryson DeChambeau has said that both he and Brooks Koepka can be great assets to Team USA at Whistling Straits this month. 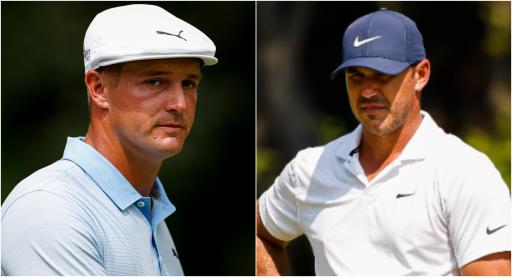 Bryson DeChambeau has said that he has no issue with teaming up with Brooks Koepka at the Ryder Cup and he believes the four-time major winner will be an asset to the side.

The Brooks vs Bryson feud has been the talk of the PGA Tour this year and there has been a lot of speculation as to how US captain Steve Stricker would be able to manage this relationship at the Ryder Cup.

Speaking to Golf Channel's Todd Lewis ahead of the Tour Championship, DeChambeau showed his commitment to his team and guaranteed that his spat will not be an issue when they tee it up against Europe at Whistling Straits.

"Personally I am 100% willing to do that (put the feud aside). There is no issue in regards to that," said DeChambeau.

"I think highly of him (Koepka), he has done a lot for the sport. He is a very interesting character that can be an amazing asset to the team.

"I know I can be an amazing asset to the team and if we all can focus on being the best we can possibly be, we will win. Everyone thinks I have an issue with him, no I don't, I really don't."

The first half of the American team has already been decided due to the number of points they have accumulated over the season. DeChambeau and Koepka are in the team alongside Collin Morikawa, Dustin Johnson, Patrick Cantlay and Justin Thomas.

Stricker has a star-studded team and the strongest American side for a number of years. It was confirmed yesterday that Phil Mickelson and Fred Couples will help out as vice-captains in 2021.

They will join Zach Johnson, Davis Love III and Jim Furyk to complete the full backroom team which will be hoping to beat Padraig Harrington's European side for only the third time in 10 attempts.

"We are trying to figure out how to beat the Europeans. They have killed us for the last decade and we need to change that. There has to be a momentum shift and we are going to come together as a team," said DeChambeau.

"We are having a dinner tonight, we are doing a bunch of things with the guys that have already qualified to make sure that we have the best atmosphere possible so we give ourselves the best chance to win."

NEXT PAGE: RORY MCILROY DEFENDS BRYSON DECHAMBEAU - "WE ALL KNOW BRYSON IS DIFFERENT"