Jason Day shows off INCREDIBLE golf complex in his back garden! 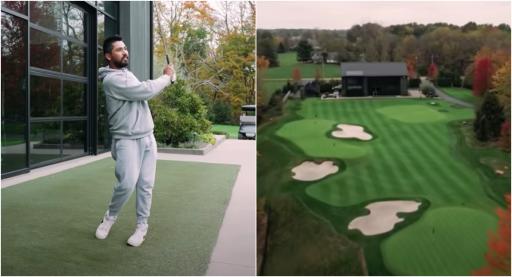 Jason Day is, unfortunately, a long way from his best golf that saw him become a major champion and the best player on the planet.

However, he has the best possible facilities at his disposal at his home in Columbus, Ohio as he recently showed us on 'Home Course', a new YouTube show started by Travis Miller, the founder of PGA Memes.

The 12-time PGA Tour winner explained that he needs the facilities to practise during the winter when the weather does not allow him to work on his game outside.

Day took us through his house which featured many of his trophies, including his PGA Championship trophy which he won in 2015, the heyday of his career.

Day has also installed a bar and some bedrooms in the complex. It is as much a place for the Australian to relax as well as practise.

He shows Miller the robotic green on the ground floor, which can change in slope for him to practise a range of putts and breaks. There is also gym equipment next to this putting feature.

Day also has a simulator next to the green which he uses a lot with his coach Chris Como. The 34-year-old explained that he uses this area to work on technical changes to his swing and then he implements them in the outdoor practice area.

The outdoor practice area is by far the most impressive part of the complex. There are three different greens that are used for iron shots, chipping and putting.

There is also a 160-yard par-3. It really is the dream for club golfers. There are three bunkers with different sand. One mimics Muirfield Village, the home of the memorial tournament, the next copies Oakmont and the third one is a pot bunker.

In the short game area, Day also compares the undulations to Augusta National, a course where he finished tied second in 2011.

We hope that this incredible golf complex that Day has built can help him return to his best golf. In 2021, he played in 22 events on the PGA Tour and missed nine cuts and made only three top-10's.

NEXT PAGE: TIGER WOODS COULD POSSIBLY SHOW UP WITH CHARLIE WOODS AT THE PNC CHAMPIONSHIP