Justin Thomas is just one shot behind the leaders after the first round of the Hero World Challenge in the Bahamas. 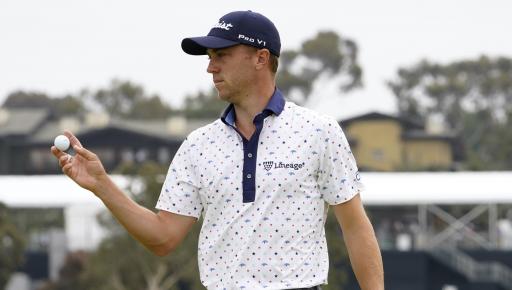 Justin Thomas sported sunglasses in the first round of the Hero World Challenge, but he used them as an aid rather than for style.

The 28-year-old revealed after his first round that he underwent laser eye surgery about a week and a half ago, which explains his rare use of sunglasses on the PGA Tour.

Despite making a double-bogey on the final hole of Albany Golf Course, Thomas still shot a 5-under-par 67 to sit one shot behind the leaders heading into the second round.

"Yeah, I've been wanting to do it for a while. It finally just worked out with the schedule to get it done," Thomas said about the surgery.

"That's why I keep walking around with the sunglasses. I don't wear those too often, just trying to protect the eyes. It was nice to get that done a week and a half ago and try to put it to the test here this week."

@JustinThomas34 is dialed in and off to a hot start. pic.twitter.com/jBuYnnlYzU

The 2017 PGA champion was as excited as every other player at Tiger Woods' return to public life this week, a fitting week for the tournament that he hosts.

Thomas has before been described by Woods as 'the brother he never had'. The pair have a strong friendship and Thomas visited Woods during his rehabilitation in his home in Florida.

Thomas' double-bogey on the 18th hole on Thursday was one of only two blemishes on the day. He made a bogey at the 12th hole but made eight birdies on the card to recover his score.

RELATED: PAIGE SPIRANAC: HOW MUCH IS THE SOCIAL MEDIA SENSATION WORTH IN 2021?

Rory McIlroy, Abraham Ancer and Daniel Berger all fired scores of 66 in the first round to lead the way. Collin Morikawa, aiming to become World No.1 with a win this week, is two shots behind on 4-under-par.

Thomas has only made two appearances on the PGA Tour since the Ryder Cup, however, he finished third at the World Wide Technology Championship.