Paulina Gretzky spoke on the Pillows and Beer podcast about her husband's incredible work ethic and life as a partner of a PGA Tour star. 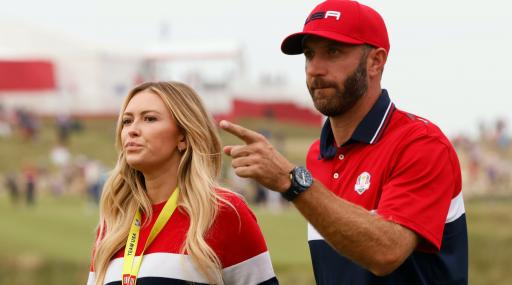 Gretzky, who has been engaged to the former World No. 1 since 2013, can often be found supporting her partner at PGA Tour events and most recently, at the Ryder Cup.

There were pictures of Gretzky amongst the celebrations at Whistling Straits, but she also said that she tries to remain calm while Johnson is in high-pressured situations.

Speaking to the Pillows and Beer podcast, Gretzky spoke to hosts Craig Conover and Austen Kroll about Johnson and his admirable will to grind at the beginning of his career.

"Dustin has worked for everything, his college coach told me that he was going to work in McDonald's! This is a guy who has literally grinded from day one," Gretzky said.

"He's in his element. That's what he does: golf, and it's such a hard sport.

"I'm not one to get excited (at PGA Tour events), I don't get how people jump up and down, I don't know how they do all that stuff. That's just not in my DNA.

"I am so proud of Dustin but I'm living it the whole week and the anxiety that I'm feeling for him, I have to keep that under wraps."

Since the Ryder Cup, Johnson has only played once on the PGA Tour at the CJ Cup. He has also dropped another place to third in the world rankings, as Collin Morikawa chases top spot.

As for the happy couple, they are set to become even happier when they get married, however, Gretzky is yet to reveal the date of their wedding, despite dropping subtle hints on her social media posts.

We know the ceremony will take place at Blackberry Farm, a five-star resort in Walland, Tennessee, which has an attractive brewery and other great features.

Gretzky, daughter of the hockey legend Wayne Gretzky, has previously said that Johnson's PGA Tour schedule has made it difficult to nail a date for them to tie the knot.

NEXT PAGE: TIGER WOODS OWES US AN EXPLANATION OF WHAT HAPPENED BEHIND THE WHEEL | OPINION