Jon Rahm and Kelley Cahill had their first child last April just before The Masters and now they are expecting a second baby boy. 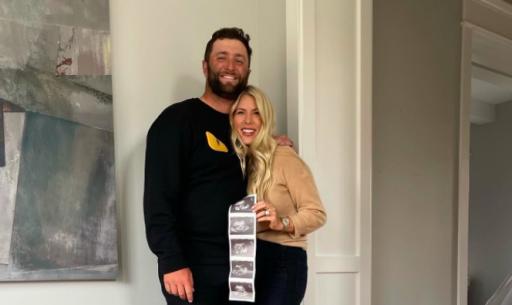 Jon Rahm and his wife Kelley Cahill have revealed they are expecting their second baby boy after making an announcement on Wednesday.

The World No. 1 and his wife had their first child just before The Masters in April 2021. It was touch and go whether Rahm would play in the event.

They welcomed Kepa to the world and now, they are due to have a second baby boy. Rahm put on a celebratory post on social media which happened to fall on his wife's birthday.

The pair met when they both attended Arizona State University. At university, Kelley was an impressive athlete. She competed as a javelin thrower and she was also a very good tennis player.

The pair moved in together for two years and in December 2019, they got married in Bilbao, Spain which is near to Rahm's home town of Barika.

It is fair to say that the happiness in their marriage has transferred into the Spaniard's play on the PGA Tour. In June 2021, he made his major breakthrough at the US Open.

He has won six times on the PGA Tour and he has now been at the top of the world rankings for 32 consecutive weeks and 39 in total.

In recent news, Rahm joined the long list of players who rejected the Saudi golf league, saying that he wants to build a legacy on the tour and moving would not be best for his game.