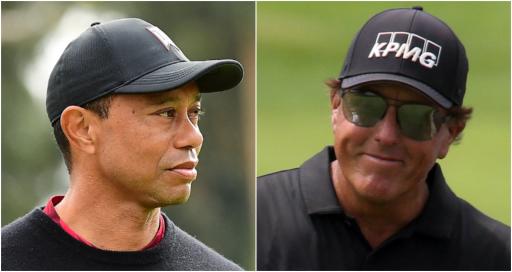 Phil Mickelson once thanked "all the crazies" before claiming he'd won the PGA Tour's player impact program. But apparently it was Tiger Woods who has scooped it, according to one reporter.

If this is indeed true, it caps an interesting few weeks in Mickelson's career. Comments he made about the PGA Tour and working with the Saudis in a phone call last November were made public which led to him announcing a departure from the sport for a while.

Things got worse for Mickelson when KPMG, his sponsor since 2008, announced they were mutually parting ways with the 51-year-old. The PGA Tour have refused to comment publicly if he is banned. There has been no word, yet, about what his other sponsors will do.

The news that Woods, 46, had won the player impact program came from the Golf Channel reporter Rex Hoggard, who quotes that "some players have been told". The news is not confirmed, though it would be believable that the tour bosses aren't too happy with Lefty.

WATCH: PAIGE SPIRANAC SAYS "IT'S HARD TO WALK WITH THESE JUGS" WHEN IT COMES TO GOLF

Mickelson - to all intents in purposes - is now taking a break from the game. How long that will be is anyone's guess. His comments, to many, were so divisive and risible that his reputation is incinerated. Other Mickelson loyalists suggest there is a route back in the game.

The short game artist took to Twitter on 29 December last year to send his thanks to those who had helped him win the 2021 PIP, saying: "I'd like to thank all the crazies (and real supporters too) for helping me win the PiP!

More: What is the player impact program?

In other Mickelson news, some players have been told that Tiger, not Phil, won last year's Player Impact Program. Still no official word but another hit for Team Lefty.

"To get the 2nd half of the money I have to add an event I haven't played in a while. See you in Kapalua." Mickelson was referencing the Sentry Tournament of Champions which Australia's Cameron Smith went on to win in record fashion. Mickelson finished T30.

There were some skeptics about whether or not Mickelson was serious. It turned out he was. The PGA Tour have previously said they will not announce the results of their $40million initiative to incentivize players to be more active on social media and grow the game.

Some critics have suggested this impact program is just a slush fund for the PGA Tour to try and keep the top players in the world happy and try and prevent them from signing up to rival leagues. The prize fund has reportedly increased to $50million this year.

Mickelson, ominously, ended his tweets by saying that he will "find another controversial topic soon". Well, he absolutely wasn't wrong there, was he?

If the news is true, it would mean Woods would collect the $8million top prize. Though the logistics of this - in the wake of Mickelson's behaviour - are bound to get complicated. Mickelson's tweet suggested he had already been paid half of the money.