Daniel Berger was involved in another rules dispute over a ball crossing a penalty area with Tyrrell Hatton at the WGC Match Play. 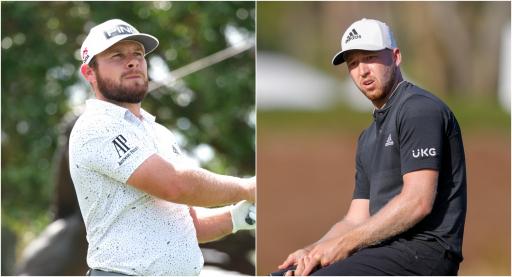 Tyrrell Hatton and Daniel Berger got caught up in a dispute about where Hatton's ball crossed the penalty area on the 9th hole on day three of the WGC Match Play.

Hatton hit his approach to the green on this 471-yard par-4 at Austin Country Club and he found the native area just next to the green. He was 1 up against the American at the time.

Berger asked Hatton's caddie to stand at the point where Hatton initially hit his shot to the green so that the pair could determine where his ball crossed the penalty line.

"I knew we were going to have this conversation," Berger said as the pair deliberated the situation.

Daneil Berger is in another "where did the ball cross the line" situation. 100% ...This time, with Tyrrell Hatton. Both players with a chance to move on... 100% #dellmatchplay love my pros pic.twitter.com/fzu4YGITMh

Footage showed that the Englishman's ball landed left and slightly long of the pin in the native area. Berger simply said," It's up to you."

Hatton went on to make a double-bogey after returning to another point 123 yards from the green where he dropped his ball to play his third shot.

Berger, who needs to beat Hatton to have a chance of qualifying for the last 16, made a par and drew things all square at the turn.

There was further drama when this match in Group 13 was on the 13th green. As they were putting, Christiaan Bezuidenhout attempted to drive the green which was much to the annoyance of Berger.

The South African hit his ball in the water on this driveable hole, but he chipped in for a par. Also at this point, Hatton was 1 up on Berger and in great shape to get into the next stage of the event.

Next Page: Jon Rahm on Patrick Reed: "I wouldn't say we are friends"