After Jon Rahm finished tied third at the Farmers Insurance Open, he was hopeful that his friend Rafa Nadal would win the Australian Open and the legendary Spaniard delivered. 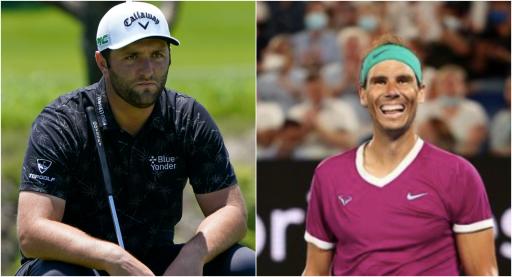 Rafa Nadal made history at the Australian Open over the weekend. He beat Daniil Medvedev in the final to win a record 21st Grand Slam title.

In this truly golden era of tennis, we have been treated to matches between Nadal, Roger Federer and Novak Djokovic that will never be forgotten.

For now, Nadal is one Grand Slam ahead of Federer and Djokovic but what has been most special about this era is that many things can dramatically change.

As well as being one of the greatest tennis players ever, Nadal is also a passionate golfer. He plays off scratch and he has previously been spotted at various PGA Tour events.

RELATED: VIKTOR HOVLAND: WHAT'S IN THE BAG OF THE NEW WORLD NO.3?

He has before described Tiger Woods as one of his idols and the PGA Tour posted footage of the slick Spaniard spectating on Woods at an event from a previous season.

Before Nadal came back from two sets down in the final of the Australian Open, his countryman Jon Rahm spoke to the media about his legacy on sport.

Rahm, the current World No. 1 golfer, described Nadal as one of his own idols and explained Rafa's love for golf as well as tennis.

"I get lucky enough to play a round of golf with him and then I've gone to a few tennis events and we've met afterwards. He is an avid golf fan. He plays golf, a lot, a lot and a lot of golf," said Rahm

RELATED: "GOLF GUYS ARE WHERE IT'S AT... THEY'RE NOT TAKING HOME A DIFFERENT CHICK"

"He's one of those that in between tournament days, he's playing golf, or before and after he might be playing golf. He's an absolute nut.

"He's one of my idols, I don't know how many Spain has, but if he were to win it would stay like that. To be the undisputed greatest of all time at a sport is very unique."

Rahm finished tied third at the Farmers Insurance Open this week to keep up his reign at the top of the world rankings. The Spanish flag is certainly being flown high in the world of sport.

NEXT PAGE: RORY MCILROY DROPS ANOTHER F-BOMB AS HE THROWS AWAY DUBAI DESERT CLASSIC