WATCH: Happy Gilmore remake of Will Zalatoris' missed putt on 18 at Torrey Pines

Happy Gilmore remake video goes viral as Will Zalatoris comes up agonisingly short in his bid for a first PGA Tour title. 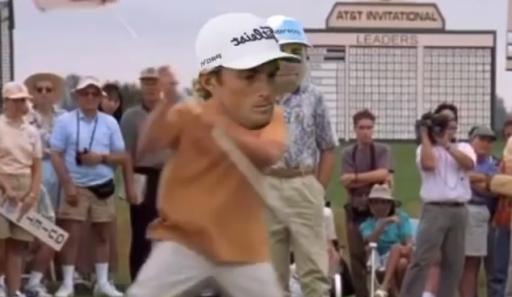 Happy Gilmore fans will be applauding the work of the @usuckatgolf Instagram page this week after a remake video featuring Will Zalatoris' agonising missed putt on the final hole at the Farmers Insurance Open went viral.

Zalatoris had an eight-foot putt for birdie to land his maiden PGA Tour title at Torrey Pines on Sunday, but unfortunately for him his ball put the indicator on at the last second as it hung over the lip of cup.

It was a putt fully deserving of some Happy treatment:

A post shared by U Suck at Golf (@usuckatgolf)

Zalatoris tapped home for par on the par-5 18th and then ended up losing to Luke List on the first extra hole, who made birdie on the 18th just as he did on his 72nd hole.

The narrow defeat for Zalatoris marks his second runner-up spot on the PGA Tour since joining the circuit last year.

Zalatoris, who many believe looks exactly like the caddie in the famous Happy Gilmore film, shot to fame last year when he finished solo second behind Hideki Matsuyama at The Masters.

Despite his near miss on the PGA Tour, we are hugely confident a first win for Zalatoris is only around the corner.

MORE: "GOLF GUYS ARE WHERE IT'S AT... THEY'RE NOT TAKING HOME A DIFFERENT CHICK"

MORE: RORY MCILROY FIRES YET ANOTHER F-BOMB AT THE DUBAI DESERT CLASSIC