Jordan Spieth and Henrik Stenson given two-shot penalties for hitting from the wrong tee box on the par-5 9th at the Hero World Challenge. 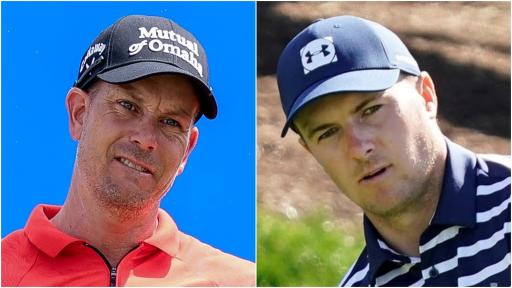 Jordan Spieth and Henrik Stenson were assessed two-shot penalties on the par-5 9th hole in the final round of the Hero World Challenge after they both played from the wrong tee box.

Spieth and Stenson were playing together in the first group of the final round but neither claimed they had been informed of which tee box to play from as they reached the turn.

According to the PGA Tour, multiple signs had indeed been posted to alert the players of the situation and the new yardages were provided on the tee sheets - however, neither Spieth or Stenson, or their caddies had realised.

Not something you see every day.

Jordan Spieth and Henrik Stenson both play from the wrong tee box and are assessed a 2-shot penalty.

"Personally, I've never experienced that before," said Spieth after the round.

Both players were informed of their two-shot penalties when they reached the fairway having hit from the wrong tee box.

They then had to return to the proper tee box and play from there.

Had they continued and then teed off the 10th hole, they would have both been disqualified.

Spieth ended up making a triple-bogey eight on the 9th, with Stenson making a seven.

It was a week to forgot for both players, with Spieth ending the week last of the 20 players on 6-over par, with Stenson 1-over par in 19th.

"We kept our heads down after finishing out on hole No. 8 and walked to the 9 tee box that we did on Wednesday, Thursday, Friday, Saturday and put the ball down and hit some beautiful tee shots," said Stenson said

"Then when we went down to the hole, went down to the balls. The rules official said, did you hit off the right tee box? And we’re like, well, yeah, kind of, and then we looked back and we saw that there was another one forward and left.

"So obviously they switched things around and put 17 on the 9th tee box today and 9 was in a different place and we didn’t pay attention being first out and just motoring along."

Spieth just tried to laugh off the tee box fiasco.

"I actually didn’t think we were going to get penalised because it’s a charity event, but then I realized there’s world ranking (points) involved and all that," said Spieth.

"My question was if we could just finish (in) 19th and 20th (place) and leave after 9, but that wasn’t an option, either," added Stenson.

"A little note on the tee box would have been helpful, and I will make sure I tee it up on the right tee box in the future because I don’t think I’ve ever done this before. Hopefully, you haven’t either.

"Have a nice Christmas everyone and we’ll see you in the new year."

Spieth also suffered a two-shot penalty on the 18th green in the third round when he forgot to replace his ball in the right position when hitting his next putt.