The big cat was back in his famous outfit, while Captain America was in the waste areas again in Albany... 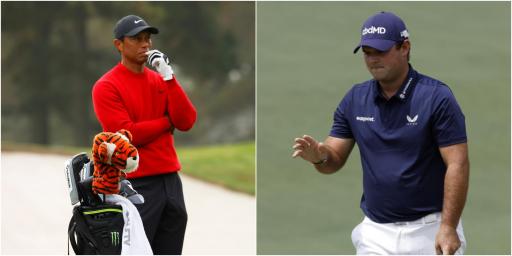 Patrick Reed and waste areas in the Bahamas have a little bit of history to say the least.

Reed's exploits at the 2019 Hero World Challenge nearly broke the golf Internet when he was accused of improving his lie.

It led to intense scrutiny over the behavior of Reed, now 31, in the following events on the PGA Tour and world wide.

There is no doubt you will have your opinion. Rory McIlroy was asked about it, and he cut a more sympathetic tone.

Brooks Koepka's opinion on that now infamous moment? He was cheating. Plain and simple.

Reed visited more sand areas in the fourth round of this tournament.

Twice in two holes in fact. But this time Reed just showed us his short game wizardry.

Left-handed from the bushes and still saves par.@PReedGolf is tied for the lead at the turn. pic.twitter.com/CZMKTllktI

At nine, he sent his tee ball way left and had to play his recovery shot into the fairway left-handed. Then he scrambled for par.

There were more heroics at the 10th when Reed visited another waste area again and SOMEHOW managed to play it out.

Does anyone want a Vice ball? He said after apparently finding one in a bush.

Short game master Reed then chipped his next shot stone dead and made a pretty ridiculous bogey at 10.

It was one of the craziest hours you'll ever watch on the PGA Tour as:

Spieth and Stenson's woes can be summed up in the video below:

Jordan Spieth and Henrik Stenson were assessed a 2-shot penalty for playing from the wrong tee box in Sunday's final round. pic.twitter.com/09iXHHNDhJ

There was also the small matter of the big cat wearing his classic ensemble again:

What a sight to behold.

US PGA
Rory McIlroy DECLINES all media requests as he storms out of PGA Championship
US PGA
US PGA: Here's how much Justin Thomas and others won at the PGA Championship
Equipment
The BEST PUMA golf polo shirts as seen on the PGA Tour!
US PGA
PGA Tour pro SLAMS Southern Hills as US PGA conditions prove difficult
US PGA
Who is US PGA leader Mito Pereira's wife? Meet Antonia Prida