The Norwegian claimed the Hero World Challenge with a one-shot victory... 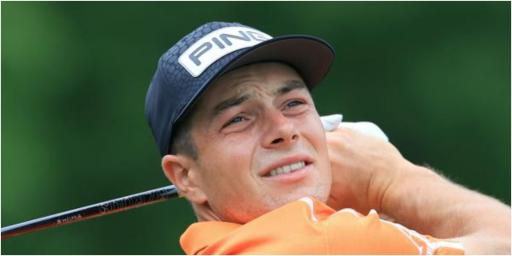 The Norwegian produced a stunning back nine tear which included back-to-back eagles on a chaotic Sunday in Albany, Bahamas.

This was supposed to be Morikawa's big day where he was going to be crowned the world's best golfer at the tender age of 24.

But in a remarkable and uncharacteristic blowup, Morikawa folded like a pack of cards and went out in 4-over par.

Elsewhere, Bryson DeChambeau threw his driver to the ground in anger and Justin Thomas dropped an F-Bomb.

Jordan Spieth and Henrik Stenson were both given two-shot penalties for playing from the wrong tee box.

Eagles rained in from everywhere. Daniel Berger drained one from just inside 100 yards. Reed chipped in. Hovland went flag-hunting.

Oh, and a certain wild cat emerged on the range. Tiger Woods was pictured in his Sunday red again, striping balls on the range.

Let us repeat. Wearing red. Again. On a Sunday. Who would have thought we would ever see that again?

In the end eagles at 14, 15 and a birdie at 16 for Hovland saw him take control. The eagle at 14 was a beautiful shot from the sand.

If there has been a lull in the PGA Tour of late, Sunday at the idyllic venue set the scene for what promises to be an explosive 2022.

Morikawa finished with a 4-over par 76.

How did it all go wrong?

He opened with a 41 today. pic.twitter.com/Snm8sbszia

Morikawa had 222 yards into the flagstick on the par-4 fourth hole when he tugged one miles left.

He aimed well left but the fade didn't appear and it was the worst swing of the week for Morikawa who saw his five shot lead reduce to one.

This was supposed to be the cherry on the cake to finish off 2021 in style for the man who only made his Ryder Cup in September.

But it instead his final round appeared to resemble more of a car crash.

That slender lead didn't last long, and in the end he turned into the chaser. But nothing was happening for the man soon-to-be married.

At the ninth, he even chunked a greenside chip into the bunker.

Morikawa chunking a chip shot. Who would have thought that could be possible?

Jordan Spieth and Henrik Stenson were assessed a 2-shot penalty for playing from the wrong tee box in Sunday's final round. pic.twitter.com/09iXHHNDhJ

Stenson, playing with Spieth, also will make headlines for the wrong reasons.

They both played from the wrong tee box and were given two-shot penalties each.

All the players were notified of the change in tee box for the ninth but Spieth and Stenson missed the memo.

Morikawa ultimately made a double at the fourth and then dropped another two shots at the seventh.

He had not yet played eight holes and he was already 4-over for the day.

Silent killer Burns. The underrated Burns, emerged into contention alongside Reed and Hovland.

DeChambeau (final score 8-under) shot a 2-over final round which included reportedly throwing his club in anger early doors.

He was paired with Rory McIlroy and was all over the shop with his drives at points in his round.

Footage emerged of him wading deep into the waste areas to find one of his errant tee balls.

Elsewhere, Woods was hitting balls on the range wearing his Sunday red and black outfit.

Reed also got himself into a sandy waste area again and played a shot out to the fairway left-handed.

He pitched onto the green and scrambled for par as chaos ensued all around him.

As Reed scrambled, Brooks Koepka's tee ball at nine came to rest against a rock and had to chip out.

When was the last time you saw Tour pros, in the final two groups, have to make these shots?

Scheffler began the day seven strokes behind the lead but he and Viktor Hovland moved into contention down the stretch.

At 14, Scheffler carded a triple bogey but then went on an absolute tear.

Hovland drained an eagle from the sand at 14 to move two shots clear.

It was his third eagle of the week at 14 for the Norwegian phenom. He then eagled the next, too.

Berger, too, wanted to get in on the act and drained his third approach at the par-5 15th. He gave it a little fist bump.

When all is said and done, this was Hovland's Sunday.

A near miss with a rules violation almost cost him the tournament.

At 17, he sent his tee shot just short of the bunker and moved some sand out of his line.

Had he been on the green, he would have lost two shots.

But in the end this was his Sunday. A fourth win. For a $1 million cheque from Tiger Woods.

Morikawa's time will come. It was not his day. But he will have plenty of them.