Jordan Spieth came from three shots behind on Sunday at Harbour Town to inflict Patrick Cantlay's second playoff defeat of the season. 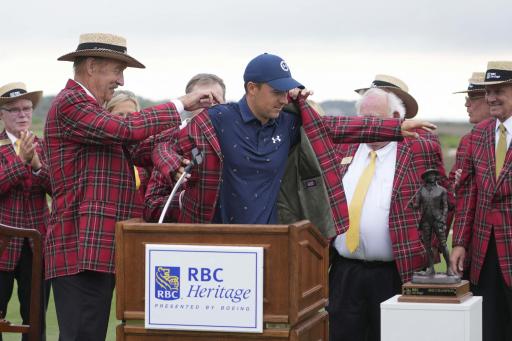 Spieth sealed his 13th victory on the PGA Tour and his first win since the Valero Texas Open in 2021, getting up and down from the bunker on the first playoff hole on 18.

Cantlay couldn't recover from a plugged lie in the same bunker and the reigning FedEx Cup champion lost his second playoff of the year. He also lost to Scottie Scheffler in a playoff at the WM Phoenix Open.

Harold Varner III began the final day with a one-shot lead on 11-under-par, but it was Spieth who burst out of the blocks when he made two eagles in his first five holes.

The 28-year-old holed a fantastic bunker shot on the 2nd hole for his first eagle and he holed a 23-foot putt on the 5th hole for another. He co-led on 12-under-par with Australian Cam Davis.

Related: WATCH: Golfer gets sent flying by gust of wind on driving range

More bunker brilliance by @JordanSpieth in a playoff.

This approach on the first playoff hole sealed the victory @RBC_Heritage. pic.twitter.com/ghI8arP11P

Davis, who won the Rocket Mortgage Classic in 2021, made five birdies on the front nine to go out with a score of 31.

Spieth received an awfully unfortunate break on the 9th hole when his ball plugged up against the lip of the greenside bunker. This led to a bogey and this came at a point when Erik van Rooyen was on fire.

The South African made his fifth birdie of the day on the 9th hole to reach 14-under-par. He led by one shot in search of his second win on the PGA Tour.

The final day at Hilton Head Island saw a saturated leaderboard of competition. Shane Lowry, off the back of his tied third finish at The Masters, made three consecutive birdies on holes 4, 5 and 6.

His birdie on the 11th hole gave him a one-shot lead on 14-under-par. Unfortunately for van Rooyen, he made four bogeys on the back nine in South Carolina.

Despite a bogey on the 11th hole, Spieth hung around and made birdies on the 13th and 18th holes to card a 5-under-par 66. He was the leader in the clubhouse on 13-under-par.

Another American who remained in contention throughout the day was Cantlay. He made birdies on the 5th, 9th and 11th holes to reach 13-under-par.

But a bogey on the 14th hole left the 30-year-old in need of a birdie to match Spieth's mark. Shane Lowry made a double-bogey on the same hole to fall back to 12-under-par with Cantlay.

Varner, who is yet to win on the PGA Tour, was also in the same boat as he chased down Spieth. Two birdies and one bogey took him to 12-under-par with three holes left.

Honda Classic champion Sepp Straka birdied the 17th hole to reach 13-under-par with Spieth, but an agonising bogey on the 72nd hole meant the Austrian fell one shot short.

Cantlay rolled in a nerveless birdie putt on the 17th hole to reach 13-under-par, while Lowry and Varner squandered chances on the 18th hole to make the playoff.

Both Spieth and Cantlay found the fairway on the 18th hole and they both found the greenside bunker at the front of the putting surface.

The three-time major champion put his sand shot to tap-in range, but Cantlay didn't have as much luck. He was plugged against the lip which put a par out of possibility.