Spieth: "You're lying if you're not saying you're interested and going to be entertained." 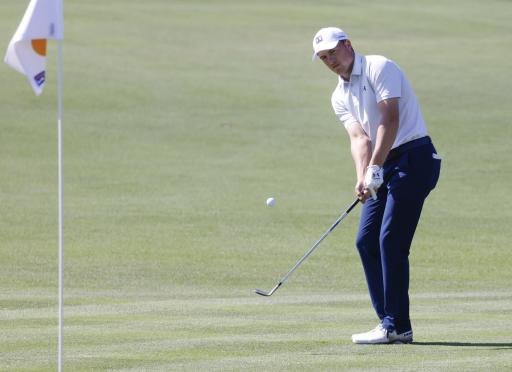 Jordan Spieth was extremely impressed with Bryson DeChambeau's driving performance at Bay Hill on Thursday and he's hoping the reigning US Open champion attempts to drive the par-5 green when he steps onto the tee during Friday's second round.

All eyes were on DeChambeau as he approached the 555-yard par-5 6th hole, but there was too much wind for him to take on the 340-yard carry across the lake to the green.

Spieth shot a 2-under par opening round of 70 on Thursday, three strokes behind DeChambeau and four behind Rory McIlroy, in what was one of the most exciting groups of the day.

DeChambeau and McIlroy put on a driving masterclass throughout the opening round and Spieth said at times, he and his caddie were eagerly anticipating which line DeChambeau was taking on from the tee.

"Yeah, there's quite a few (holes) where I'm sitting there like bumping Michael like, you know, where is this one going to start," said Spieth following his first round.

"Man, he drove the ball extremely well today. I think he only had one drive that kind of went off line on 4 and he still made birdie. So at that speed, that's impressive."

DeChambeau has made it clear that should the wind be blowing in the right direction, he will attempt to drive the green at the 6th hole and it's something that Spieth hopes to see when he plays alongside him again in the second round.

"He said if he gets any downwind he's going to give it a go. So I think tomorrow's northeast, so hopefully I can just tee off first and get out of the way, get off to a good start, get off first, put one out there in the fairway and then just watch, yeah, I mean, you're lying if you're not saying you're interested and going to be entertained.

"And Rory is going to be pretty much, with his ball flight too, I mean, it's going to be right behind Bryson's, I imagine, with this driver he's using, his gamer. I think he has another driver that's got another 10 miles an hour ball speed, but I don't think they're probably far off from each other, so, yeah, I think it will be, with that wind tomorrow, it could get a little exciting."

NEXT PAGE: Billy Horschel had a CRINGEY RESPONSE to this spectator heckle at Bay Hill