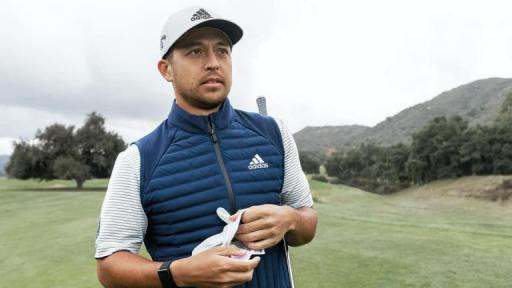 Xander Schauffele surged late on day two to move into a narrow one-stroke lead at the Phoenix Open at TPC Scottsdale.

Not much was seemingly happening for the four-time PGA Tour winner on Friday with just one birdie and 10 pars on his first 11 holes, but then things really hotted up when he made three consecutive birdies from the 12th before draining a 21-footer for eagle at the par-5 15th.

Schauffele squandered a chance of another birdie at the short par-4 17th when taking three putts from just shy of the green, but he quickly made amends when firing an approach shot from out the fairway bunker to within five feet for another birdie and a round of 7-under 64.

The World No.5 finds himself at 12-under par and one stroke clear of US Ryder Cup captain Steve Stricker and Keegan Bradley.

"I'm playing pretty good golf right now," said Schauffele. "The better you play, the more you expect. I'm just trying to have a lot of fun out here and stay focused in the moment."

Scottie Scheffler continues to impress on the PGA Tour despite still seeking his maiden PGA Tour title, but the American might not have to wait much longer as he progressed to 10-under par alongside Kyoung-Hoon Lee and Sam Burns.

Brooks Koepka moved up to 8-under par, as the four-time major champion bids to win his first tournament since the WGC-FedEx St Jude Invitational in July 2019, while Jordan Spieth finds himself on the same score as he too looks to notch his first victory on the circuit since the 2017 Open Championship.

Justin Thomas made a disastrous double-bogey six at his first hole of the day, but he recovered superbly from there with nine birdies on his card to move up to 7-under par.

Pre-tournament favourites Jon Rahm and Rory McIlroy both have it all to do over the weekend at 5-under par, while defending champion Webb Simpson is a further stroke back on 4-under par.

NEXT PAGE: SOCIAL MEDIA IS GETTING VERY EXCITED ABOUT SPIETH MOVING INTO CONTENTION