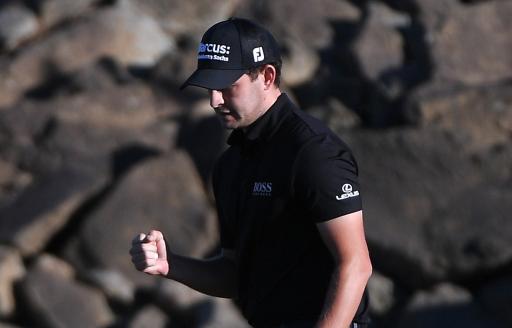 Patrick Cantlay has revealed his golf ball is travelling around 30 yards shorter at a cold and rainy Pebble Beach this week in comparison to when he plays golf on the East Coast in the summer on the PGA Tour.

Cantlay, now the pre-tournament favourite for this week's AT&T Pebble Beach Pro-Am following the withdrawal of Dustin Johnson, told the media his 7-iron was going 157 yards in his practice round at Spyglass Hill when it would normally be going 190 yards.

California native @Patrick_Cantlay sits down with the media @ATTProAm, his first event in three weeks. https://t.co/Gng9Sdo1Xo

Conditions are expected to reach a high of just 55 degrees at this week's PGA Tour event, which will see three rounds played at Pebble Beach, and one on Spyglass Hill.

"I think (the rain) will make everything just a little tougher," said Cantlay, who tees off alongside Jason Day and Si Woo Kim at Pebble Beach on Thursday.

"It’s already cold, so it might feel a little colder even, and I think that will make scores just a little worse, especially if the wind were to blow.

"Then depending if they play lift, clean, and place or not, mud on the golf ball always adds a little bit of unpredictability and that would make it a little harder, and then the golf ball will go a lot shorter.

"It already goes very short here compared to the rest of the country, so if it rains, it will go even shorter.

"If the wind’s into you, it goes even shorter. I feel like the wind affects the golf ball more here. I think that’s for two reasons: The ball actually is going shorter, so you can put the same amount of force into the golf ball and it goes shorter. Then second, it’s so cold that it’s hard to move your body as fast or make your swing as long.

"Especially with the greens being soft, you can hit low shots, so there’s really no advantage to trying to step on an 8-iron and get the most out of it. You’re better off hitting a three quarter 7-iron and for the most part it’s just going to sit and stop.

Final round @theamexgolf was a special one - most under par in a @PGATOUR round to date for me! Going to build on this, get some rest, and get ready for @attproam... pic.twitter.com/hWRp935DTx

As for his actual game after a two-week break from competitive action since posting an incredible final-round 61 to finish second at the American Express, the World No.11 is confident he can continue his consistent form this week.

"I always like being up here in Monterey," said Cantlay, who has finished 1-17-13-2 in his last four starts on the PGA Tour.

"Even though it’s cold this time of year, I like playing Pebble Beach. I like Spyglass. So I’m excited for this year. It looks like we’re going to get some rain, which isn’t uncommon, but I always like being here and I like the golf courses and I like the California golf.

"My game’s been good. Obviously how I played my last round on Tour was unbelievable, even I was a little surprised I was able to shoot 11-under on that golf course. But I think it bodes well for the future, and my game’s in a good spot, my processes are all really good, and if I can make a bunch of putts like I did on that Sunday, look out."

NEXT PAGE: THE BEST MALLET PUTTERS USED ON THE PGA TOUR