Richard Bland overcame the young Italian Guido Migliozzi in a sudden-death playoff at The Belfry, securing the first European Tour win of his career. 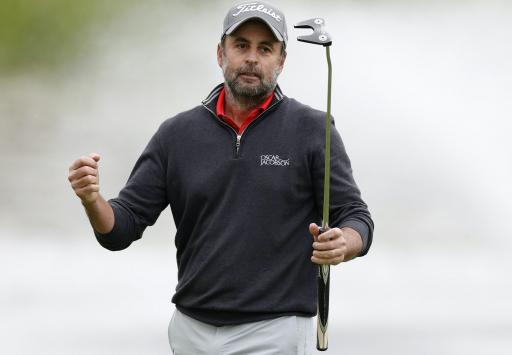 Richard Bland has won the Betfred British Masters at The Belfry after a playoff against Guido Migliozzi, in what was an emotional first win for the 48-year-old on the European Tour.

Bland, who made just one bogey in all four rounds, began the day three shots behind overnight leader Eddie Pepperell on 7-under-par, but Pepperell failed to mount a final-round challenge.

"My game had been trending in the right way and I've worked really hard. We've worked so hard on the wedges and I just drove the ball so well this week.

"Especially for me, I'm not the longest on tour so I have to hit fairways and I've probably missed single-digit fairways all week, and if I have missed one it's been by a couple of inches.

"I came off a pretty decent week last week and a top 10 in Gran Canaria. I knew my game was in decent shape."

Bland played solidly throughout on Sunday and started perfectly with a birdie on the par-4 1st hole. The Englishman added two more birdies on the front nine to move to 10-under-par heading into the last nine holes.

Bland hadn't won before on the tour despite making an incredible 477 starts, and although he took a dangerous line off the 18th tee during his fourth round, he made a clutch birdie to shoot 66 and post 13-under-par in the clubhouse.

Migliozzi, who has two wins on the European Tour, was on 9-under-par at the start of the day after his third-round 67. The Italian made four birdies in a bogey-free round on Sunday to finish on 13-under-par alongside Bland.

The 24-year-old birdied the 15th and 16th holes to match Bland's score and he also made a brilliant up and down from the greenside bunker on the famous final hole for par to force a playoff.

The pair were locked together and returned to the 18th tee box. Both players hit safe drives, but when the Italian missed his putt for par up on the green, Bland was left with one of his own for the win.

The World No. 218 rolled his ball in to claim victory in the playoff, and he was able to celebrate his win with his family via a video call behind the 18th green.