Jordan Spieth has praised rising PGA Tour star Tom Kim ahead of the CJ Cup and revealed the youngster stumped him with a question about his career. 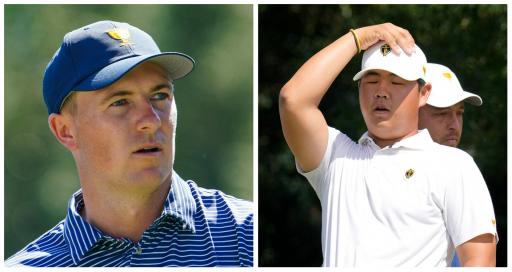 Jordan Spieth praised rising PGA Tour star Tom Kim ahead of the CJ Cup as he revealed the young Korean is now working with his physio and he stumped him with a question about his career.

The 29-year-old will tee it up in a star-studded field at Congaree Golf Club from Thursday after having a season with moments that reminded us of the Spieth of old.

He's not back to his best but he's certainly getting there and his performance in the 2022 Presidents Cup was truly dominant, going 5-0-0 as the U.S. side defeated the International team 17.5 to 12.5.

Spieth tasted victory again last season at RBC Heritage - after some help from wife Annie - went close at the Byron Nelson and had a top-10 in a major at The Open.

He revealed that he's got a new set of irons but he won't put them in the bag until after this week.

Elsewhere, the changes announced by the PGA Tour commissioner Jay Monahan with the introduction of "elevated events" means that Spieth will now have a tinker with his schedule.

As a new father, Spieth said he's unlikely to be playing more than three weeks in a row.

He was also asked his thoughts on the recent performances of Kim, 20, who appears to be becoming a fan favourite on the circuit already.

Kim was a bright spark for the International side at the Presidents Cup. He gained his PGA Tour for this season with victory at the Wyndham Championship and he picked up his second win at the Shriners Children's Open at TPC Summerlin two weeks ago.

Spieth said: "Tom Kim is working with my instructor, he's moved to Dallas, he's working with my physio, same physio that I use, that a number of guys use. So I've seen him and I'm around him quite a bit in the last six weeks versus I didn't know Tom before that.

"What a really, really -- he's really, I don't want to say "kid" because that's going to make me seem old, but what a nice kid. And very inquisitive, asking a lot of questions to try and get better.

"I think that's something I wish I did when I was his age, just coming up and asking players, you know, yesterday I think he asked me what was your most difficult major to win.

"You know, I was just like, I don't know if I've been asked that question before ever, what was the most difficult and why. He's trying to learn as he's in such a great place.

"[He has] got an unbelievably bright future as a lot of these young Korean -- seems like right now you have this progression that you've seen on the LPGA Tour over the last 10 years is starting to happen on the PGA Tour with young talented Korean players that are coming out and not afraid to win at an early age.

"Si Woo [Kim] might be the one of the most talented individuals in the game of golf and it's always been fun to watch him play. So I think future's really bright."