Justin Thomas and Collin Morikawa have opened up on what they have been doing differently on the greens before the second leg of the FedEx Cup Playoffs. 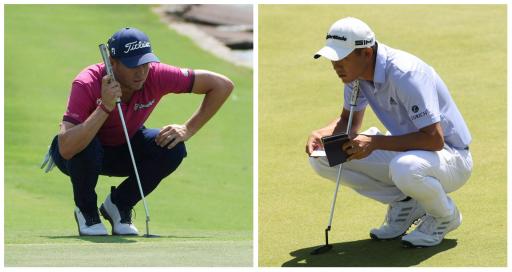 Justin Thomas is known to be a bit of a perfectionist when he plays golf.

After the first round of the BMW Championship at Wilmington Country Club in Delaware, 29-year-old Thomas confirmed he has made a small but significant change with his putter.

He's still using his Scotty Cameron T5 model, only it's been shortened by half an inch. And it's already paid dividends for the two-time PGA Champ.

Thomas opened with a 5-under 65 in the PGA Tour's leg of the FedEx Cup Playoffs, highlighted by an eagle at No.14.

He hit 77 per cent of greens in regulation and gained 1.9 shots on the field in Strokes Gained: Putting.

Related: Luke List with one of the worst putting displays you'll ever see

"Yeah, it felt great," Thomas told the media. "It was the best I've putted in an extremely long time. Every single putt I hit was exactly where I wanted, the speed I wanted it. It was nice. I hadn't felt that in a while."

So why the change?

"They may be the same but none of them are ever the same in terms of clubs in general.

"But it feels identical, so getting adjusted and acclimated to the speed wasn't difficult, but just being a little bit shorter was so much easier for me to get in a good setup.

"That's something we looked at earlier this year and we were going to mess with this off-season, but I haven't been putting great for how I feel like I should be, and it was just one of those things.

"I'm like, if this is going to be an easy adjustment that's going to help me improve, then why wouldn't I do it."

He's switched back to a conventional setup, doing away with the claw grip.

Before the FedEx St. Jude Championship, at TPC Southwind in Memphis, which was won by Will Zalatoris, Morikawa said he just tried it out one day and saw the putts start dropping.

"The week before Memphis I was kind of toying around with some putters and gripped it conventionally and saw some putts go in and just felt like the stroke and the movement was nice," he said.

"It's always a little nerve-racking when you pull it out at a tournament, but it's not like I haven't putted like that before, it's just been a while."

He added: "Sometimes you just go down one path and you don't get that feel that you necessarily want.

"[I] just randomly out of the blue tried conventional just for a day out when I was practicing and it felt good.

"Didn't really make much but felt good at least. That's the biggest thing is confidence; do you feel confident over your putts? It's felt good, and hopefully we continue that over the next few weeks."

Next page: Zalatoris caught taking a peek at Scheffler's bag