J.T. Poston was foot-perfect all week in Illinois, securing a three-shot wire-to-wire win over Christiaan Bezuidenhout and Emiliano Grillo at TPC Deere Run. 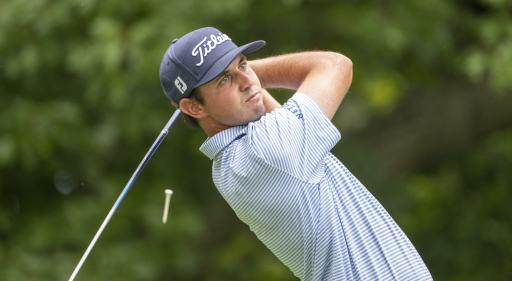 The American carded a 2-under-par 69 to become just the third wire-to-wire winner of the event's history and the first since David Frost in 1992.

Poston, 29, becomes the second wire-to-wire winner on the PGA Tour in 2022. Joaquin Niemann led from start to finish to win the Genesis Invitational back in February.

Poston, Christiaan Bezuidenhout and Emiliano Grillo all earned spots in The 150th Open Championship later this month via the Open Qualifying Series.

Poston began the final day with a three-shot lead and he burst out of the blocks with three birdies in his first three holes. He reached 22-under-par and looked on course for victory.

Big up-and-down for birdie from @JT_ThePostman

He opens up a 3-shot lead heading to 18. pic.twitter.com/zqfhzUcyxm

Grillo, 29, fought back with two birdies in his opening four holes. After Poston made back-to-back bogeys on holes 5 and 6, Grillo calmly birdied the par-5 10th hole to get within one shot of the leader.

Poston regained the three-shot lead he began with on 20-under-par when Grillo bogeyed the 14th hole. Grillo dropped back into tied second with Bezuidenhout, Christopher Gotterup and Callum Tarren on 17-under at this stage.

Bezuidenhout managed to keep bogeys off his card in Illinois on Sunday and with birdies on the 14th, 15th and 17th holes, the South African applied a degree of pressure on Poston as he got within two strokes.

Bezuidenhout couldn't quite add another birdie on the final hole. He carded his second 66 of the week to post the clubhouse lead of 18-under-par.

Poston kept his cool out in front and made a birdie on the par-5 17th hole to take a three-shot lead down 18. His three-shot win was confirmed with a calm par on the 72nd hole.