J.T. Poston: What's in the bag of the wire-to-wire winner of John Deere Classic?

J.T. Poston calmly saw off Christiaan Bezuidenhout and Emiliano Grillo on his way to winning for the second time on the PGA Tour. 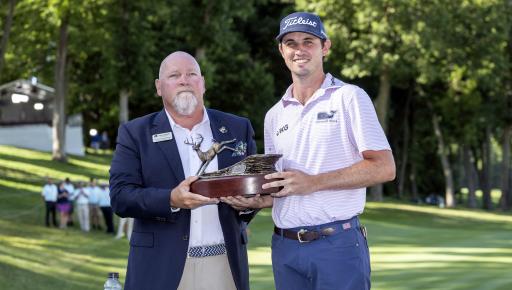 J.T. Poston was overcome with emotion after winning the John Deere Classic on Sunday which was his second career win on the PGA Tour.

The 29-year-old led from start to finish throughout the week in Illinois and his score of 69 in the final round was enough to win by three shots from Christiaan Bezuidenhout and Emiliano Grillo.

He became just the third wire-to-wire winner in the tournament's history and the first since 1992. He has also qualified to play in his first-ever Open Championship at St Andrews next week.

"It feels great to get another win. You know, they don't come easy out here, and I really wanted to get that second win to sort of validate Wyndham, so it feels good to get it out of the way," Poston said after his victory at TPC Deere Run.

"(I've) been playing some great golf the last few weeks, and really going back to April I felt pretty good about my game. I felt like this was coming, and it's nice to get it done here at the John Deere where it's just a great spot."