PGA Tour pro Dylan Wu went on an epic rant after having a bad week on the greens at the John Deere Classic. 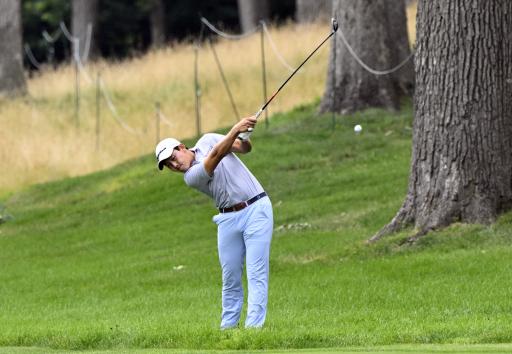 PGA Tour pro Dylan Wu was pretty much all of us playing the John Deere Classic at TPC Deere Run over the weekend.

Whilst J.T. Poston was busy burying putts, Wu wanted to bury his head into his hands.

I mean, seriously Dylan, please tell us how you really feel!

In all honesty, this was a rant pep talk for the ages. In the space of 40 seconds, Wu has absolutely gone in on himself.

It all unfolded on the par-5 10th hole. Wu managed to get home in two on the monstrous hole and gave himself an eagle putt. But that attempt stopped six feet short.

He then missed that.

And then he absolutely went off.

“So bad this week. Absolutely freaking awful the entire week”.

He then marks his ball. But he’s not finished.

Sometimes all you need is a little pep talk @Dylan_Wu59 pic.twitter.com/HIlZiUIYzr

“So bad,” he says after lining it up. “Can’t hit anything with good speed. So freaking horrible”.

Wu, 25, then manages to make the putt, then he decides to toss it into the water.

“He doesn’t want any part of that anymore,” the announcer on the coverage says.

Still, that pep talk seemed to work. He absolutely stiffed his next tee shot.

The tournament was won by Poston, who claimed his second win on the PGA Tour.

He won by three strokes over Christiaan Bezuidenhout and Emiliano Grillo.

Next page: DP World Tour pro says he "was wrong about Ian Poulter"