Justin Rose just needed a par on the 18th hole for the 12th round of 59 in PGA Tour history but unfortunately he made bogey. 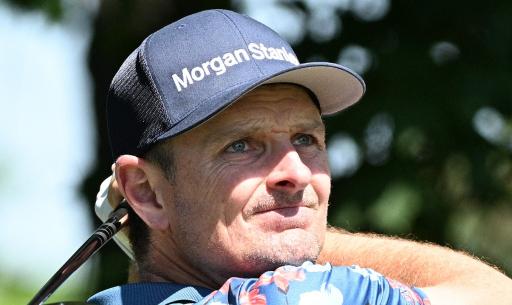 Justin Rose agonisingly missed out on becoming the 12th player to shoot 59 on the PGA Tour after making bogey on the par-4 18th in the final round of the RBC Canadian Open.

Standing on the final hole, Rose, 41, was bidding to become the first player in PGA Tour history to shoot a round of 59 that contained more than one bogey.

Rose was also bidding to become the first European to shoot 59 on the PGA Tour.

It tied Rose's lowest ever round on the PGA Tour.

But Rose will leave Canada tonight thinking what might have been.

He shoots, he scores @JustinRose99 holes out from 136 yards away. pic.twitter.com/MyOWAHGWOr

Rose flew out the blocks on Sunday when holing his approach shot to the par-4 1st and then birdied the par-4 2nd.

He would par the next two holes before making birdies at the 5th and 7th to move to 5-under par for the round.

Rose then bogeyed one of the easiest holes on the course at the par-5 9th to go out in 30 shots, and it very much appeared to derail his charge on the leaderboard.

But the 10-time PGA Tour winner quickly ignited things thereafter with a birdie at 10 followed by an eagle at the par-5 11th.

Rose then added further birdies at 12 and 14 to move to 9-under par for the day, before converting a six-footer at the par-5 15th for his third eagle of the round.

That moved him to 11-under par for the round, meaning he just need three pars to the house to join an elusive group of players to shoot golf's magic '59'.

But Rose would find the greenside bunker at the rowdy par-3 16th and fail to get up and down for par, sending him back to 10-under par for the round.

He quickly bounced back from that though when sending his approach shot to within two feet of the pin on the par-4 17th, and he would convert it to move back to 11-under par for the round.

Needing just a par down the par-4 18th, Rose got a flyer with his approach shot from the rough and sent his ball into the grandstands at the back of the green.

Rose took his relief but could only progress his ball to 18 feet away from the pin, and unfortunately he would narrowly miss the putt to the left.

Still, an incredible round of 60 for Rose and one that pushed him up into the top five at the Canadian Open for his best finish of the year so far.

Birdie for a 58
Par for a 59@JustinRose99 hit his approach shot over the green on No. 18. pic.twitter.com/wk6c2RncUD