Rory McIlroy put on a wedge masterclass to defend the RBC Canadian Open on the PGA Tour. 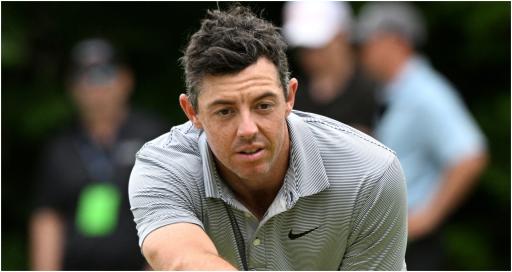 Rory McIlroy claimed his 21st PGA Tour victory by successfully defending the RBC Canadian Open on a day of dramatic twists and turns before taking a clear dig at Greg Norman.

McIlroy started the day as the joint leader with the PGA Tour’s nearly man Tony Finau with US PGA Champion Justin Thomas trailing close behind but both came up short.

The Northern Irishman raced out of the blocks at St. George’s in Ontario in front of a packed and amped up crowd and made the turn in 29 strokes with birdies at No. 1, 4, 6, 7 and 9.

When he strode up to the 18th green he did so to chants of “Rory! Rory! Rory!” as he successfully defended a title on the PGA Tour or the DP World Tour for the very first time.

Related: Rory McIlroy hits out at his wedge critics after Canadian Open win

Related: How much they all won at the Canadian Open

When McIlroy finally tapped in for birdie at the 72nd hole, the entire green was surrounded by excited fans in scenes reminiscent of Tiger Woods’ incredible win at the Tour Championship.

McIlroy said: “Yeah, I mean, it’s incredible. Playing with Tony and JT today; two of the top players in the world. I think the worst score in the group was 6-under par.

“This is a day I’ll remember for a long, long time. The 21st PGA Tour win – one more than someone else – that gave me a bit of extra incentive today. I’m happy to get it done.”

LIV Golf Investments CEO Norman, 72, a polarising figure in the golf world, won 20 times on the PGA Tour in his career.

He added that he re-dedicated his time to golf after the pandemic. “This makes me happy,” McIlroy said Infront of an absolutely raucous crowd.

His final round of 8-under 62 will be of greater significance after a dramatic week in the golf world and perhaps the emergence of a rival Tour that could change the landscape of professional golf forever.

Thomas, 29, also started well too. He made birdie at the second hole and four consecutive birdies from the 6th hole to pile the pressure on McIlroy. But a devastating bogey at 17 ended his hopes.

Finau, who is also widely rumoured to be interested in the Saudi-backed LIV Golf series, finished one stroke behind McIlroy by carding a final round of 8-under 64 to steal outright second from Thomas.

England’s Justin Rose finished fourth after going agonisingly close to shooting a 59. Rose’s round included seven birdies, three eagles and three bogeys. He failed to get up and down at 18 to get into the history books.

Rose said: “I'm totally disappointed, yeah. Because you know what's at stake, for sure. You're really just playing the last hole -- I never shot 59 before -- so it would have been a lovely footnote on the week.

“I don't know how much was in my control or not, but I could have made we were right in between two clubs and a decision and I went the wrong way on a decision and paid the price for it.

“So those are the things that do happen and it's amazing how those situations present themselves right at the end. It was tricky, but all in all there's tons to take out of this week.”