Patrick Reed has turned his back on the PGA Tour and joined the LIV Golf league. Here are some of the funniest reactions... 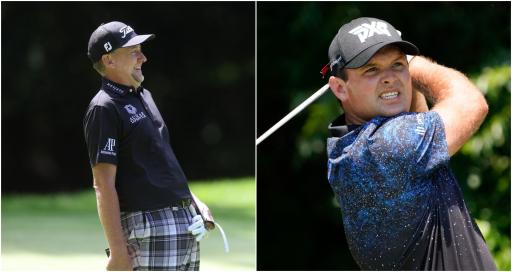 Former Masters champion Patrick Reed was the latest big name to sign-up to the Saudi-funded LIV Golf Invitational Series in defiance of the PGA Tour.

Related: Patrick Reed is the latest to ditch PGA Tour

Though if we're being truthful, perhaps we should have seen this coming. No announcement was made, but Reed quietly WD'd from the RBC Canadian Open on Tuesday morning.

Fast-forward to Saturday afternoon and a grinning Reed, 31, hopped on the live broadcast during the final day of the inaugral $25million LIV Golf Series event at Centurion Club.

Reed was joined by Americans Pat Perez and Bryson DeChambeau this week who have also decided to shun the PGA Tour.

"I'm excited about seeing more golf. You're not just seeing coverage from featured groups -- you're seeing it from everywhere."

Reed has won almost $37million in a decade on the PGA Tour and currently occupies the World No. 36 ranking.

Since he won the 2018 Masters, it's been a bit of a grind. He's chopped and changed equipment and also battled a bout of double pneumonia late last year.

He feared for his life but returned to the game just before the Ryder Cup selections. Reed was not picked and his social media activity suggested he was not happy.

When Reed was announced, there were some pretty amusing reactions on social media.

Here are some of the best:

Patrick Reed and LIV Golf is a marriage made in heaven.

Ok whatever you thought @JerryFoltzGC was getting paid, multiply it by 54. https://t.co/ot9ji23G1v

BREAKING: In wake of Patrick Reed leaving for the LIV Tour, PGA Players have invited him to join them on the 9th green at 9 tonight for a going away party.

Your telling me I never have to see Patrick Reed, Kevin Na, and Bryson Dechambeau play golf ever again??. Thank you to The LIV Tour.

RIYADH (AP) - Today, LIV Golf announced the addition of Patrick Reed, prompting an outcry from those who say the Saudis have "sold their souls."

"We understand the hesitations," said a House of Saud spokesman. "And we certainly don't condone his heinous actions. However-"

Right, that's it. The bullshit-o-meter has been broken.

Reporter: “So, Patrick - how do you feel about returning to Augusta next year as a LIV Tour member?”

The rumor is true. Patrick Reed was NOT paid by LIV to play there - we paid him a significant amount to leave the Tour.