ESPN anchor Sage Steele has returned to work and reflected on the moment she was struck with an errant tee shot by Jon Rahm. 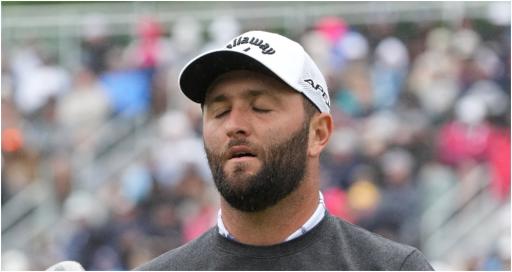 A few weeks ago, ESPN anchor Sage Steele was struck by one of Jon Rahm's errant tee shots at the US PGA Championship.

Rahm shouted fore loudly but unfortunately Steele was struck squarely in the mouth and hit the deck hard on 19 May.

She has returned to work now, but has revealed that she still will need to have more work done to repair the damage.

Steele revealed on an eisode of "SportCenter" that she feared for her life after impact and paid tribute to her colleague Matt Barrie for keeping her calm.

"One moment you're out on a course just innocently watching amazing golfers play out at a golf major," Steele said.

"Next moment, you're on the ground. You're in pain with your entire life flashing before your eyes, scared to death, trying to comprehend what the hell just happened."

Went back and found the video of Sage Steele getting hit in the face by a Jon Rahm tee shot yesterday, first reported by @GeoffShac

Good lord that had to hurt. Hope Sage is OK pic.twitter.com/x0HxjSBgK0

Steele, 49, suffered undisclosed mouth injuries. She shared a photograph on the show showing the damage that Rahm's Callaway Chrome Soft X 2022 caused her to bleed profusely.

She revealed that there is still more work to be done on her road to recovery.

Barrie then paid tribute Steel, saying: "I'll say this and I've said this before, you took that like a champ. Most people would've passed out."

Steele wasn't the only person struck by an errant tee shot at Southern Hills.

Australia's Cameron Smith hit one tee shot so wildly off line that it struck Aaron Wise in the back of the head.

PGA Tour pro Joel Dahmen was playing in the group and noted how even fans along the side of the fairway would have heard the sound of the ball cracking his head.

Wise managed to carry on. Smith was mortified and apologetic. He did shout fore.

You must always shout fore.