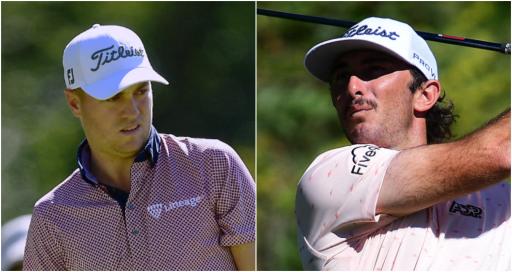 The field at the 2022 Players Championship had a lot of time on their hands over the first two days.

A rain-soaked TPC Sawgrass meant that the competitors were left twiddling their thumbs wondering when they would get out to play.

A four-hour rain delay on day one was just as frustrating for the field as it was the viewer. Give us golf. And give it to us now.

So what exactly did the field do with their time off? Rory McIlroy got the afternoon off to be with his daughter Poppy.

Justin Thomas, a Florida resident and Kentucky native, managed to chill out with his lovely dog Frank. Others relaxed and got massages on site.

But Max Homa decided to tempt fate. He wanted the rain to continue so it would give him an opportunity to go and see The Batman.

But then things took a turn. Homa referenced the time he lost to Thomas at the US Amateur at Cherry Hills.

A fist-pumping Thomas almost caught Homa on the chin. "Wouldn't have hurt tho cuz he was like 112 pounds of golf terror," Homa said.

Don’t worry. If I could do that u wouldn’t have beaten me at Cherry Hills at the US Am after u almost punched me

It was payback after losing to a kned with knee high socks fist pumping in my face on 17 at Riv!!!

The story isn’t that interesting btw. JT made a putt and fist pumped and I almost took one on the chin. Wouldn’t have hurt tho cuz he was like 112 pounds of golf terror @JustinThomas34 https://t.co/Fg5qBANu0S

Did Max Homa ever make it to The Batman?