Patrick Reed was caught giving the middle finger and saying "f--- you" at the 2022 Players Championship. 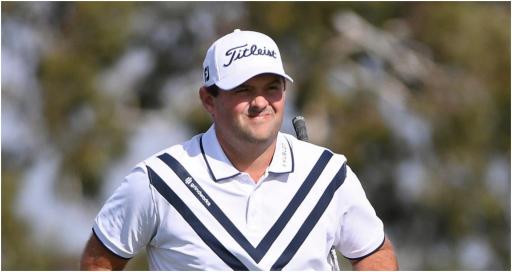 Patrick Reed was caught giving the middle finger and saying "f--- you" at the 2022 Players Championship.

Reed, 31, has been one of the more controversial figures in golf ever since his PGA Tour debut way back in 2013.

Nicknamed Captain America, the former Masters champion has often been involved in rules issues which has led to wide ranging debates.

Some could suggest that he often brings it on himself. Though to be fair, even when he is innocent he still gets accused of wrongdoing.

Not so long ago, at Tiger Woods' Genesis Invitational, he was filmed wiping his wedge using his pocket. It raised eyebrows.

There was legitimately absolutely nothing in it and yet all eyes were on him such is the reputation that he has.

Patrick Reed with the middle finger “f*ck you” just before cameras cut away!

You LOVE to see it. pic.twitter.com/n8FCrVQwqz

P-Reed with the f-bomb and middle finger and they couldn't blur it in time! pic.twitter.com/3E2D0Ougop

At the Players Championship, Reed was caught giving the middle finger. We're not quite sure to who, or why. But it was caught.

The cameras picked it up and hurriedly panned away. The moment happened on the ninth hole at TPC Sawgrass. He had missed a birdie putt.

So...was Reed cussing and flipping out at his golf ball? We doubt he'll want to talk about it much.

The PGA Tour reportedly sent out a memo to its players before this week reminding them every shot was going to be filmed.

Therefore, they were expected to be on their best behaviour. Viewers in the UK had to be apologised to after Rory McIlroy cursed.

A frustrated McIlroy got himself to 2-under par but before the players were forced off due to rain he was 1-over.

The microphones picked up a few expletives from the soggy Northern Irishman.

Reed signed for a 1-over par first round. It was entertaining. Four bogeys going out. One birdie and an eagle returning home.