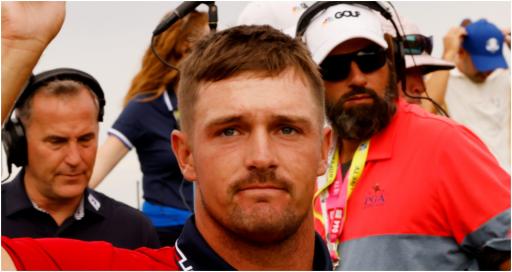 Cast your mind back to September 2021 in the golf world and you will recall all the talk about Bryson DeChambeau.

DeChambeau was informing the golf fans of his wish to participate in the world championships and hit some frightening drives.

That was whilst he was also preparing for the Ryder Cup in Whistling Straits. Just how could he do both?

Fast-forward to March 2022 and DeChambeau proved that he could do both suitably well. He absolutely smashed it.

Perhaps one of the best moments - depending on which side of the pond you live - came when he took on Sergio Garcia.

Garcia, a European heavyweight and Ryder Cup legend, had his record in the singles taken apart by DeChambeau.

DeChambeau, in fact, drove the first green and walked to the dance floor holding up his driver like a baton. He then drained the eagle putt.

In the immediate aftermath of victory, DeChambeau hugged his team mates, drank champagn and laughed and joked.

He admitted later in interviews he did not get a chance to enjoy the win as much as he wanted to.

He hopped on a plane to Mesquite, Nevada, to compete in the Pro Long Driver's Association world championships.

He surpassed expectations - even his own - and left the field in the round of eight. Kyle Berkshire won the tournament again.

Despite its popularity, the PLDR does face financial issues to try and keep things ticking over.

But they have returned for a second season, and world champion Berkshire competed in their first tournament last week.

DeChambeau has also reportedly put his weight behind it and is now a part-owner. The news was first reported by Golf.Com.

They report he has done so to ensure the "continued interest in the sport into the near future".