Justin Thomas congratulated Rory McIlroy after the two battled it out on a thrilling Sunday at the RBC Canadian Open. 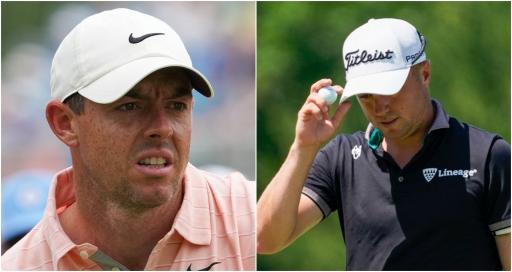 Justin Thomas has congratulated Rory McIlroy on his 21st victory on the PGA Tour and also aimed a similar dig in Greg Norman's direction.

Related: McIlroy hits out at wedge critics after returning to winning ways

US PGA champion Thomas, who turned 29 in April, battled it out with the Northern Irishman down the stretch at the Canadian Open at St. George's.

It was McIlroy who emerged the winner despite losing strokes on the field in putting during the final round but the Ulsterman simply had one message for his long time pal: "Let's do it again next week".

What a week. That’s why we play, and that’s why we play on the @PGATOUR. Got to battle against one of the best today and got out dueled, but not without a fight. Congrats to @McIlroyRory on his 21st () win and an amazing finish. Can’t wait for @usopengolf!

McIlroy took time after his win to pay tribute to the man who got the better of him at Le Golf National at the 2018 Ryder Cup.

"Yeah, so JT is a tough competitor, but he's also a really, really good friend of mine. And I have probably more respect for him than maybe anyone else out here," he said.

"Just because we both live in South Florida, we practice so much together, and I see how much, how hard he works at his craft. I appreciate that and I respect that. It's always cool to be able to go up against the best and come out on top.

"And, yeah, we had that embrace on the final green and I just said, 'Let's do this all again next week'.

"That's what I said to him. So that would be cool to be able to do it all over again with him."

The 2022 U.S. Open will begin on Thursday at Brookline.

McIlroy is the favourite to win the major, with Justin Thomas favoured second by the bookmakers.

The last player to win a PGA Tour event and a major the following week was McIlroy.

Jon Rahm is the defending champion.

Next page: The equipment Rory McIlroy used to win the Canadian Open