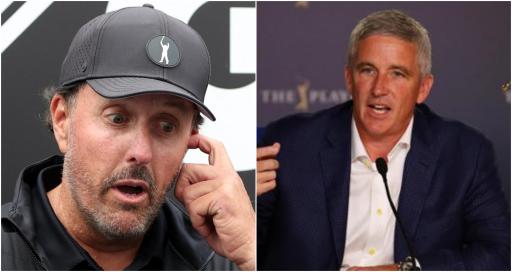 PGA Tour commissioner Jay Monahan has been conspicuous in his absence in recent weeks and months.

His tour faces the biggest existential threat it has ever come up against in the form of the Saudi-backed LIV Golf series.

So far, the mega riches on offer have prized players such as Bryson DeChambeau, Phil Mickelson and Dustin Johnson from his grasp.

More players are sure to follow. We now know that Monahan and the tour's lawyers are likely heading to the courtroom.

Where and when we do not know. How long this will take to be resolved is also not known. It could take years.

Nor do we know how long the the PGA Tour Saudi rebels' suspensions will last. At this point, the future of golf looks very different.

Monahan joined the CBS broadcast of the PGA Tour coverage of the RBC Canadian Open last night and spoke to Jim Nantz.

His last public appearance was at The Players at TPC Sawgrass in March. There, he wanted to try and convey a position of strength.

"The players have made their choices," he said, pointing to the pledge of loyalty from Johnson et al. How times have changed.

It's clear that Monahan's tone was very different last night. Monahan had one question:

"Have you ever had to apologise for being a member of the PGA Tour?"

That was a direct reference to the fact that family members of the victims of 9/11 are currently suing Saudi Arabia.

Fifteen of the 19 hijackers who attacked America were from Saudi Arabia.

Last week, Graeme McDowell said he was proud to help Saudi Arabia on their journey through golf.

His comments were polarising. Some golf fans are simply not bothered. Others are outraged.

What did Monahan say during the broadcast?

"It's been an unfortunate week that was created by some unfortunate decisions. Those decisions being players choosing to violate our tournament regulations," he told Nantz.

"It's my job to protect, defend, and celebrate our loyal PGA Tour members, our partners and our fans and that's exactly what I did. I don’t think it was a surprise to anybody.

"Given how clear I had been about how we were going to handle this situation.

"We made a decision last week to suspend those players, and they're no longer eligible for tournament play and that, at this point, is all we're prepared to talk about.

"We'll see how things continue to develop as we go down the road here."

More: How much they all won at RBC Canadian Open

I have two families that lost loved ones on 9/11

Monahan said: "My heart goes out to them and I would ask that any player that has left, or that would ever consider leaving, have you ever had to apologise for being a member of the PGA Tour?"

"Why do they need us so badly?

"Because those players have chosen to sign multi-year lucrative contracts to play in a series of exhibition matches against the same players over and over again.

"You look at that versus what we see here today, and that's why they need us so badly.

"The best players in the world are here at the RBC Canadian Open, with millions of fans watching, and in this game, it's true and pure competition that creates the profile in the presence of the world's greatest players."

The future of the PGA Tour

"I couldn't be more excited about where we go from here," he said.

"We've talked about the fact that we're going to grow faster over the next 10 years than we have at any point in our history.

"You look at this incredible group of young, talented, international or emerging members, playing at the highest level of the game to a cadre of supporters from our media partners, to our corporate partners, to our community partners.

"The best players in the world make wonderful things happen on this platform day in and day out, week in and week out.

"This organization is going to continue to evolve in the face and shape of the great members that we have here.

"And we're going to continue to advocate and grow this game in the right way and continue to make meaningful contributions as an organization.

"I couldn't be more excited about the future."

Next page: Rory McIlroy hits out at wedge critics after winning in Canada