Justin Thomas and Kevin Kisner ROAST each other after Presidents Cup

Justin Thomas and Kevin Kisner roast each other on Twitter after the United States win a ninth consecutive Presidents Cup. 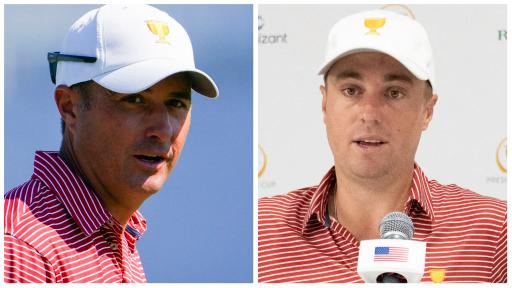 Justin Thomas and Kevin Kisner hilariously threw shade at one another after the United States ran out convincing 17.5-12.5 winners at the Presidents Cup.

The win marked USA's 12th victory in 14 renewals of the biennial contest against the Internationals.

Davis Love's men then sauntered around Charlotte with celebratory champagne and cigars.

But there was still plenty of time for some ribbing, once again proving just how close this fresh United States lineup really is in 2022.

Thomas and Kisner got involved with Barstool Sports' Dan Rapaport's tweet, which took aim at the lack of featured Kisner coverage during the broadcast.

This is your reminder that Kevin Kisner did indeed play in this Presidents Cup. Because the broadcast would lead to you to believe otherwise.

"This is your reminder that Kevin Kisner did indeed play in this Presidents Cup," tweeted Rapaport.

"Because the broadcast would lead you to believe otherwise."

Kisner only took half a point from three matches, going down to Chistiaan Bezuidenhout in the singles.

Thomas, meanwhile, starred with four points from a possible five, winning all his matches with his good friend Jordan Spieth and losing his only point in an 18th hole loss to Si Woo Kim.

"I was on his team and didn't even know Kevin Kisner played," Thomas replied to Rapaport's tweet.

Kisner then hit back with: "Good playing today!"

When the Americans and Internationals shook hands with one another on the 18th green, Kisner was overheard on the mic saying to Si Woo Kim that he was the "ugliest f***** I know".

Next Page: Justin Thomas and the anniversary of being annoyed at gimme length putts