Justin Thomas sparked another gimme debate after getting a little bit annoyed at not being given a putt at the 2022 Presidents Cup. 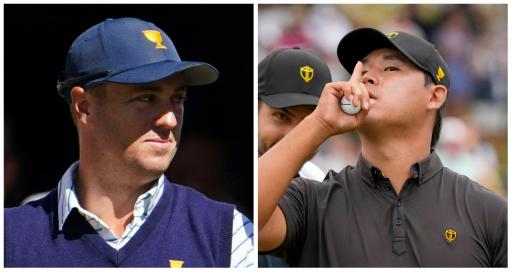 Whenever a Ryder Cup or a Presidents Cup rolls around we know there is likely to be a drama over players not being handed a gimme. This year, the man who sparked the debate once again was Justin Thomas.

The amusing incident happened in the lead singles match between the aforementioned two-time major champion Thomas, 29, and Si Woo Kim for the International side.

Related: Tom Kim... Love him or hate him?

Nothing juices me up for a day of team golf like JT's insistence at displaying his frustration over not getting a putt inside of 3 feet. pic.twitter.com/KXWJBSQBWE

What do you think of the head shaking? Should the putt have been conceded?

Interestingly, it was on this exact date a year ago that Thomas got a bit ticked off over the same thing happening during the Ryder Cup at Whistling Straits.

Every year, on Sept. 25, Justin Thomas gets annoyed when a putt is not conceded to him.

On the Saturday morning the European pairing of Lee Westwood - now on the LIV Golf Tour - and Matthew Fitzpatrick were 1 up through five holes against the U.S. duo of Patrick Cantlay and Xander Schauffele.

Fitzpatrick had a 15-foot putt to increase their advantage. He left his attempt approximately 18 inches from the hole.

That might be inside the friendship zone when you're playing with your mates but no such courtesy was given by No Pat Hat and X-Man.

Westwood - who it's fair to say is a notoriously shaky putter inside a few feet - was absolutely furious and tidied up the par.

Moments later Thomas - playing alongside Jordan Spieth - were down by two against the pairing of Bernd Wiesberger and Viktor Hovland.

Just a reminder that Justin Thomas gave this reaction when Spieth wanted to give a “gimmee”. Justice is a dish best served cold.

Thomas, this time, was the angry party and proceeded to lay his putter horizontally on the ground to indicate how close the putt actually was.

Thomas and Spieth ultimately won their match. The players involved later refused to talk about what had happened on the course.

On the Sunday, Bryson DeChambeau was involved in another gimme drama.

Thomas lost his incredible match last Sunday against Kim at Quail Hollow Club. Things also got a little bit tense when the International player "shushed" the partisan crowd. Kim won the match with a birdie at the 18th hole.

The American had a strong week and went 4-1-0 overall.

Andy Roberts: "Gimmes should remain during friendly rounds with pals. After all, nobody likes to see someone three-jabbing from inside three-feet and scuffing the green around the cup. Not to mention acting as a major case for speeding up pace of play.

"But I certainly believe gimmes should be removed in professional and club matchplay events.

"PGA Tour ShotLink data proves players only convert 96% of putts from inside of three feet, so if there is a 4% of a miss then why not take it.

"It also eliminates any bad blood between players. Just tap it in."

"Thomas was caught on film alongside Spieth earlier in the week refusing to concede a short putt then was absolutely beside himself at not being given a putt by Kim of similar length.

"That kinda behaviour is unnecessary in my opinion, although it is fairly humorous."

Matt Chivers: "Gimmes shouldn’t be scrapped as they are an integral part of matchplay which makes it so unique.

"However, you should play until you're told otherwise. Don't ask for gimmes and don't complain when you're not given one."

What do you think? Get involved in the debate on our social media channels on Twitter or Facebook.