Kevin Kisner to Si Woo Kim at Presidents Cup: "You're the ugliest f***** I know"

Kevin Kisner and the rest of the US side shook hands with the Internationals at the conclusion of the Presidents Cup, and Kisner couldn't help getting a few jokes in along the way. 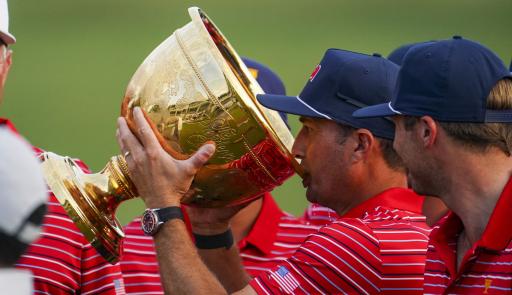 Kevin Kisner was in the mood of his life after the USA won yet another Presidents Cup at Quail Hollow, beating the Internationals 17.5 - 12.5.

Despite brief moments of promise for Trevor Immelman's spirited International team, Xander Schauffele clinched the winning point against Corey Conners in what was a closer-run thing than we all expected.

More: Here's why there are no South Korean players on LIV Golf right now

Kisner, who lost in the final match of the week against Christiaan Bezuidenhout, only earned half a point for America over the four-day event. He was determined to erase this from his memory on Sunday afternoon.

"My experience can ultimately win in this scenario. There is nothing that any of these can do that can hang with me tonight, I promise you," the 38-year-old said, confident he could drink America's youngest ever Presidents Cup team under the table.

"I have never seen a better display of golfers and a worse display of partiers, and I am the best partier on this board. Amen. That's why they picked me. I got half a point, but I brought the fun."

This wasn't the only sledging that Kisner did after the Sunday singles were complete. Each player from each side shook hands with one another on the course, and the man from Aiken was dishing out one-liners for fun.

He described K. H. Lee as "the most handsome man in America." He went for the opposite strategy of affection for Si Woo Kim: "Si Woo, you're the ugliest f*****! I know"

Kim burst into laughter in what was a hilarious moment from a memorable week. It was certainly memorable for Kim who beat Justin Thomas in a superb top match on Sunday. This was the third point he contributed to his side.

The South Korean made a clutch birdie on the final hole to beat the US PGA champion. Thomas still has the surprisingly negative record of never winning a singles match in the Presidents Cup.

Thomas also exchanged some words with Kisner on Twitter after America maintained their unbeaten record in the event on home soil. It seems the PGA Tour veteran's sledging knows no bounds.