Tiger Woods, Susie Maxwell Berning, Tim Finchem and Marion Hollins will all be inducted into the famous club in March 2022. 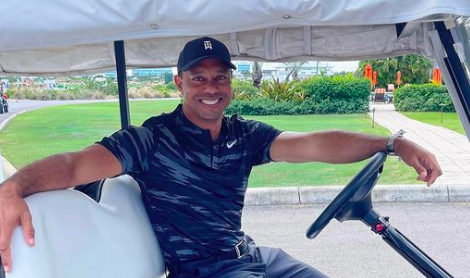 Tiger Woods has a date set for his long-awaited induction into the World Golf Hall of Fame.

Along with Susie Maxwell Berning, Tim Finchem and the late Marion Hollins, Woods will be inducted into the famous club on March 9, 2022.

The ceremony will take place at PGA Tour headquarters in Ponte Vedra Beach, a day before the Players Championship kicks off at TPC Sawgrass.

This induction session was called in Spring 2020 and it was supposed to be held in 2021, however, the Covid-19 pandemic delayed the event.

Tim Finchem served as the PGA Tour commissioner from 1994 to 2016 and Marion Hollins was a famous amateur golfer and golf course architect.

It is fair to say that Woods' inclusion in the World Golf Hall of Fame was a foregone conclusion. He has won 15 major championships and only Jack Nicklaus has won more.

The 45-year-old has also won 82 times on the PGA Tour and his legacy in the game is unrivalled. However, Woods recently revealed that there is no chance of a full-time comeback to the tour.

As well as Woods' induction to the World Golf Hall of Fame, Renee Powell will be the first recipient of the Charlie Sifford Award for advancing diversity in golf.

The ceremony is set to be shown live on Golf Channel and it is the first time that the induction will take place in Florida since 2013.

Two-time US Open champion Retief Goosen was inducted in 2019, as well as Billy Payne and Dennis Walters. Peggy Kirk Bell and Jan Stephenson were also inducted two years ago.

NEXT PAGE: THREE EVENTS WE EXPECT TIGER WOODS TO PLAY ON THE PGA TOUR IN 2022

US PGA
Who is US PGA leader Mito Pereira's wife? Meet Antonia Prida
US PGA
Kramer Hickok has a nightmare in the sand then holes out at PGA Championship
US PGA
Who is PGA Tour star Will Zalatoris' girlfriend? Meet Caitlin Sellers
US PGA
Cameron Smith hits PGA Tour pro ON THE HEAD with errant tee shot at US PGA
PGA Tour
Phil Mickelson's Mum: "Not too many people recognise him"