Justin Thomas was temporarily in trouble on the 1st hole at the Valspar Championship on Saturday and he was confused at the ruling he was given. 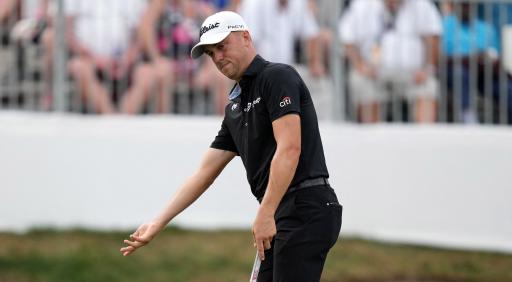 Justin Thomas was left confused during a ruling he was given on the first hole of his third round at the Valspar Championship.

Thomas' tee shot settled to the left of an out-of-bounds fence and his point to the rules official was that it was a temporary boundary fence.

If it was deemed as a temporary immovable obstruction (TIO), the 2017 PGA champion would've been able to take free relief. But the rules official Andrew Miller told Thomas that this wasn't the case.

Miller said that the fence was deemed as a boundary of the course and you don't get free relief from objects that define a course boundary. But this is what confused Thomas.

He asked Miller if this fence was usually here. Miller said no. "OK, so it is temporary, but it’s not a TIO," Thomas replied. "That doesn’t seem to make much sense, does it?"

Related: This PGA Tour pro has hit longest drive of 2022 - but it's not Bryson DeChambeau

It sounded like Thomas had a point, nonetheless, he was ordered to play his ball as it lay. Despite having to pitch out on to the fairway, the World No.8 birdied the par-5 hole at the Copperhead Course.

"If these were stakes here like it is any other round of golf you play, then this is perfectly normal," Thomas said.

"But because this is put here for this golf tournament I feel like it should be something that you should get relief from. I don’t know."

He shot his third consecutive round of 66 for the week to finish on 15-under-par for the tournament. He is three shots behind Davis Riley heading into the final round.

The exchange between Thomas and Miller was caught on the broadcast cameras, so it made for intriguing viewing. It was a relief that Thomas was still able to make a birdie.

Next Page: Greg Norman on Phil Mickelson: "He made a mistake... I feel sad for Phil"