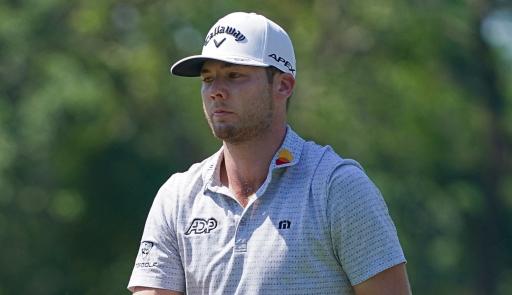 Sam Burns won his second consecutive Valspar Championship on Sunday after beating Davis Riley in a playoff at Innisbrook Resort.

The impressive young American is now a three-time winner on the PGA Tour after he beat his old friend Riley on the second playoff hole.

Riley began the day three shots ahead of Burns at the Copperhead Course, but Burns’ round of 69 brought him level after 72 holes. Burns holed a long putt on the 16th green to secure victory.

With his second win of the 2022 season, Burns has broken into the top 10 in the world rankings for the first time in his career. He has also risen to second in the FedEx Cup rankings.

"It's crazy. Davis played well today, especially the way he finished. Hats off to him, he played great," Burns said after the playoff.

Related: "Saudi Golf League will be as successful as Greg Norman's back 9 at The Masters!"

"I just tried to play steady today and we didn't make a lot of mistakes. A lot of the time on Sundays, if you can just play your way around and make a bunch of pars, throw a few birdies in here and there, a lot of the time it works well."

Justin Thomas and Burns cut the gap to Riley immediately from three shots to two shots as they both birdied the 5th hole. When Riley reached the same hole, he made a poor triple-bogey eight and all seemed lost.

From two shots in front, the PGA Tour rookie fell one shot behind. Showing great character, Riley chipped in on the par-3 8th hole to draw level at the top on 16-under-par.

Thomas, who was looking for his first win since The Players Championship in 2021, bogeyed the 8th hole. With just the back nine remaining, Burns and Riley shared the lead on 16-under-par and Thomas was one back.

Riley is looking for his first TOUR win while Burns seeks his 3rd. pic.twitter.com/Yr3TEScd7z

With back to back birdies on the 11th and 12th holes, defending champion Burns took a commanding two-shot lead on 18-under-par.

Frustratingly, Thomas bogeyed the 11th hole but bounce-back birdies at the 13th and 14th holes brought him back into contention.

Burns held a two-shot advantage with three holes left, but he faltered on the par-3 17th hole and he was forced to make a clutch nine-foot putt for a bogey to keep a one-shot lead on 17-under-par.

The door was open for Thomas and Riley. But Thomas could only manage a par on the 72nd hole at the Copperhead Course, which meant he finished with a 70 on Sunday and one shot behind on 16-under-par.

After a birdie at 17, Riley had a look for the win on the 18th hole but it wasn't to be from 16 feet. Burns and Riley, friends from their amateur days, entered into a playoff.

Both players parred the first playoff hole which was played on the 18th, but then Burns boxed a fantastic putt on the 16th hole to seal the deal.