Justin Thomas sums up Stadium Hole: "I hit it to five feet and people booed"

Justin Thomas said that when playing at the WM Phoenix Open, you need to be prepared for a variety of crowd reactions on the 16th hole. 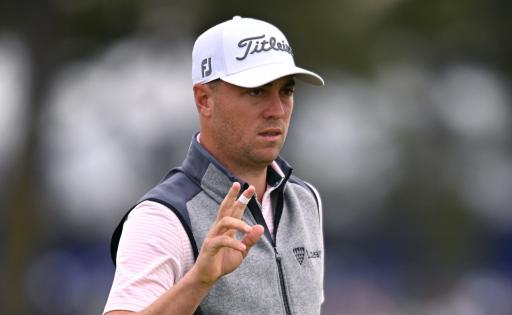 Justin Thomas said you have to embrace the 16th hole at TPC Scottsdale when you choose to compete at the WM Phoenix Open.

14 PGA Tour wins, one major championship and two Ryder Cup appearances into his career, Thomas has dealt with every type of hostile atmosphere and pressured situation.

He certainly backed his words and embraced the stadium hole on the Stadium Course when he stuck his tee shot to five feet and rolled in the birdie on Thursday.

This contributed to a solid opening round of 67. He is currently three shots behind Sahith Theegala who was 7-under-par after 16 holes when darkness stopped play.

RELATED: THIS COUNTRY PRODUCES THE BIGGEST HITTERS ON THE PGA TOUR, AND IT'S NOT USA...

"You definitely have to manage it, that's first and foremost, but you definitely have to embrace it. I hit it to five feet today and I still had people yelling or booing, when people have 15 cocktails, they're going to find something that's wrong," said Thomas after the first round.

A dart to 5 feet at the 16th ...@JustinThomas34 wants all of it pic.twitter.com/0DnwTlbpFE

The 16th hole at TPC Scottsdale is one of the most iconic holes on the PGA Tour. Nine players have made hole-in-ones since the event moved to the Arizona venue in 1987.

Arguably the most famous ace came in 1997 when Tiger Woods thrilled the crowd and holed his tee shot. Woods' good friend Thomas said you have to compensate for the adrenaline you feel when hitting to the short 154-yard hole.

RELATED: SAHITH THEEGALA: THE UNEARTHED CHARACTER OF THE PGA TOUR

"I think the hardest part is the fact that it's a wedge. It would be a lot more fun if we could hit a driver because we're so amped up and so much adrenaline and it definitely took me a couple of years to understand just how to play that," Thomas added.

"You almost have to play or at least I play a couple of yards for that adrenaline when I'm feeling it. There's going to be times when I don't.

"But it's the same thing when you get in contention, it's just I've been fortunate enough to get myself in some spots before where I understand and know how I react to it, so it definitely helps on a hole like that."

NEXT PAGE: RICKIE FOWLER'S WILD FRONT NINE IN PHOENIX SHOWS US WHY WE LOVE HIM