A penalty he called on himself. A left-handed swing. A dart at the par-3. Rickie Fowler's front nine had a bit of everything in Phoenix. 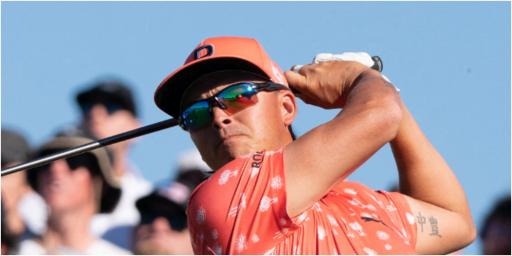 Rickie Fowler's front nine during the first round of the WM Phoenix Open was almost as outrageous his outfit.

It's a course that has been good and bad to him. It was the scene where his ball memorably rolled back into the water in 2019 after a drop. But he went on to win.

That was his fifth PGA Tour title. Since then, it's been a bit of a rocky ride. He's absolutely no stranger to the brilliant and the terrible.

Fowler's front nine was what you would have expected from Fowler these days. Entertainment.

That included a bit of everything, really. A penalty he called on himself after his ball moved when he was doing a bit of housekeeping.

He also gave us a left-handed swing.

Sky Sports' Andrew Coltart roasted him and told us it looked better than his right-handed version. Poor Rickie.

Eventually, Fowler signed for a level par round after making the turn in 3-over. His trevails started early on a the par-4 fifth.

His TaylorMade golf ball came to rest near some rocks and a cactus. Where Xander Schauffele succeeded, Fowler failed.

He accidentally moved his ball when trying to clear away some rubbish next to the ball. He called a rules official over and was given a one-stroke penalty.

Three holes later he sent his tee shot off line and ended up having to play his shot southpaw. He connected with the ball pretty well, mind a few spectators had to duck out of the way.

Fowler also set up a beautiful birdie with a dart. Fowler's entertaining round came to an end with an eagle at the 17th.

His chip was launched high up into the air. The ball put the breaks on then rolled into the cup at a beautiful pace.