Sahith Theegala: The unearthed character of the PGA Tour

Everyone who knows Sahith Theegala will say he was destined for the PGA Tour and he is proving his credentials at the WM Phoenix Open. 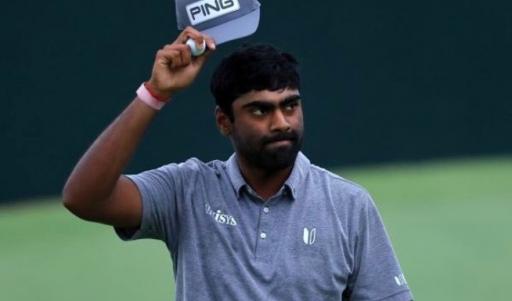 Sahith Theegala is an extraordinary golfer for many reasons. You could use this word to describe his ability, his demeanour on the course, his character and his imagination.

He won the Junior World Championships at the age of six playing crosshanded. When his long-time coach Rick Hunter first took him to a putting green, he could tell by his innate ability to chip and putt that he was going places.

His father Murli once said from a young age, Sahith would be practising until dark and he would be in tears at the end of the day and desperate not to go home.

Theegala turned into a fantastic college golfer at Pepperdine University near Malibu, California. He won four collegiate titles and he also won the Australian Master of the Amateurs in January 2020.

In the same year, he picked up the Haskins Award, the Jack Nicklaus Award and the Ben Hogan Award representative of college golf’s top player. He is just the fifth player ever to win all of the Player of the Year honours.

The young star suffers from scoliosis which has created a curvature in his spine. This has forced him to swing in a different path from his fellow professionals.

It is these unearthed bits in between and the intricate details that make Theegala who he is. Roy Cootes, the 24-year-old's best friend and college teammate, once told the PGA Tour an incredible story of Theegala's hilarious behaviour in practise sessions on the golf team.

"Our freshman year, he would hit a shank for fun to throw people off on the range," said Coote.

"I don’t know if I should say a name, but there was a very good golfer that was a senior on the complete opposite end of the range, and Sahith was like, ‘I’m just going to shank one over to this guy to make him look back,’.

"I’m pretty sure he got his attention because it was kind of close."

It was Jon Rahm. His humorous and eccentric sense of fun is mirrored into his game. By those closest to his golf, he is also known as an escape artist.

"He hits his ball into a bush near the green with water on the other side of the green in an impossible spot, and he hits it to like four feet out of a bush," said Cootes about a practice round one day in Las Vegas.

"Unbelievable shot. I absolutely freaked out. We all did."

Theegala's escapism tendencies might also be helped by the alleged fact that he can't hit a straight shot. Hunter can attest to this as when the PGA Tour star was just seven, he asked to be taught how to draw and fade the ball around obstacles such as trees.

Every golfer has their quirks and they have worked for Theegala in abundance. In 2021, he secured his first-ever PGA Tour card which was an incredible moment for both him and his family.

When he is competing on the tour and you happen to overhear a conversation with his caddie, it will likely be about the LA Lakers and his love for basketball.

In his 15th career start on the circuit at the 2021 Sanderson Farms Championship, he held the 54-hole lead but couldn't get over the line. Nonetheless, this would've only whet his appetite for more success.

Through 16 holes in the first round of the WM Phoenix Open, Theegala finished on 7-under-par and held a one-shot lead before darkness halted play.

For all of his funny habits and unique personality traits, he is a fantastic character that I can't wait to discover more about in 2022.

NEXT PAGE: THIS COUNTRY PRODUCES THE BIGGEST HITTERS ON THE PGA TOUR, AND IT'S NOT USA...