Kevin Na and his wife Julianne are expecting their third child this week so the five-time PGA Tour winner had to withdraw from the flagship event. 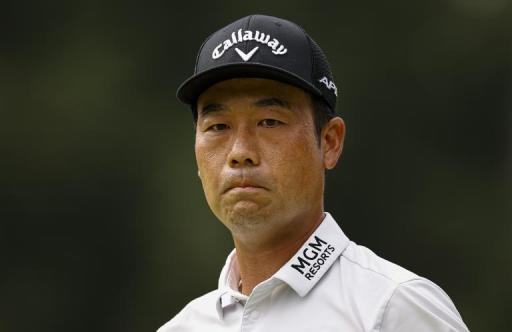 Kevin Na is unable to compete at the Players Championship this week, but the 38-year-old has a very good reason for his withdrawal.

Na and his wife Julianne are expecting their third child, so he didn't want to risk missing the birth while playing at TPC Sawgrass.

Na had to withdraw from the BMW Championship in 2019 when their son Leo LeeWoo Na was born. The pair also have a daughter named Sophia Ria Na.

The five-time PGA Tour winner announced that he and his wife were expecting with a tweet on Monday night, which was met with many congratulations.

"I decided to WD from the @THEPLAYERSChamp we are expecting our 3rd child this week!" Na posted to Twitter.

Throwback to this moment from Tiger Woods and Kevin Na pic.twitter.com/qboXzu0dEk

Na also withdrew from the Players Championship in 2021 and 2017 and you would have to go back to 2015 to find his last top-10 finish at PGA Tour's flagship event.

His best finish at TPC Sawgrass came in 2009 when he came tied third, five shots behind the eventual winner Henrik Stenson.

Despite winning the QBE Shootout back in December alongside Jason Kokrak, Na has struggled to find consistency on the PGA Tour in the 2021/2022 season.

In six appearances, he has missed three cuts and his best week came in a tied 13th finish at the Sentry Tournament of Champions.

As a result of Na's withdrawal, 28-year-old Taylor Moore will now make his debut at the Players Championship this week.

Next Page: Awful vandalism at Florida golf club could cost up to $25,000